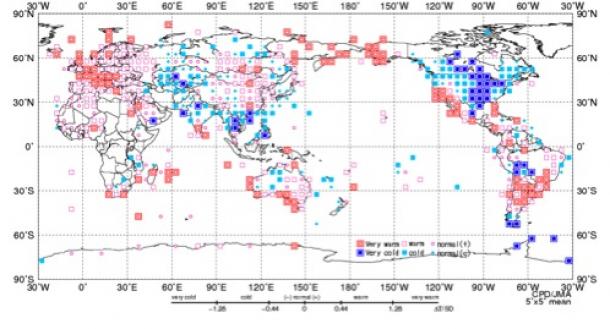 The recently ended meteorological summer/winter (December, January, February) witnessed many extreme weather conditions. The World Meteorological Organization has put together a compilation of highlights, based on reports from National Meteorological and Hydrological Services and WMO Regional Climate Centres. This round-up is meant to serve as an information guide and is in response to media enquiries. It is not fully comprehensive and does not replace the WMO’s authoritative reports on the Status of the Global Climate.

According to the U.S. National Climatic Data Center, the combined average temperature over global land and ocean surfaces for December-February was the eighth highest on record for this period, at about 0.57°C (1.03°F) above the 20th century average of 12.1°C (53.8°F).

The United States of America: Overall, contiguous USA experienced a much drier and colder than average winter, according to the U.S. National Atmospheric and Oceanic Administration. The 2013/2014 winter was in sharp contrast to most winters of the past two decades, when temperatures were predominately warmer than the 20th century average.

Below-average temperatures dominated east of the Rockies because of repeated outbreaks of Arctic air. The persistent cold during winter resulted in 91 percent of the Great Lakes being frozen by the beginning of the March, according to NOAA's Great Lakes Environmental Research Laboratory. This was second-largest ice cover after 1979 for the Great Lakes since records began in 1973. The Polar Vortex - a deep reservoir of cold air over the Arctic - is usually held over high latitudes by the jet stream, a fast moving band of air 10 km up in the atmosphere which drives weather. This year, a “kink” in the jet stream allowed the reservoir of cold air to move southwards across the USA. A blocking pattern meant it was locked into place, keeping severe weather systems over the Eastern United States extending down to northeast Mexico.

Florida and much of the West had above average temperatures, as did northwest Mexico. California had its warmest winter on record, while Arizona had its fourth warmest. Arizona, California, New Mexico, and Texas each had a top 10 dry winter season. During winter, drought intensified across the West and Southern Plains.

Large parts of Canada witnessed unusually cold temperatures during the winter.
Many regions in Ontario observed February temperatures among their 10 coldest on record and coldest in more than 30 years, with departures more than -5°C (-9°F) at some stations.

The United Kingdom had its wettest winter since national records began in 1910, according to the Met Office. New records were set for many parts of the UK, with double the normal rainfall in southeast and central England. It was the wettest winter in the long running. England and Wales Precipitation (EWP) series going back to 1766, with 435 mm of rain being recorded up to 24th February. This beats the previous record of 423 mm set in 1915. The main reason for the mild and wet winter weather was the predominance of west and south-west winds, bringing in mild air from the Atlantic - as well as the unsettled and at times stormy conditions.
Temperatures were around 1.5 °C warmer than average, at 5.2 °C.

Ireland had its wettest winter on record. Rainfall totals were well above the long-term seasonal average everywhere. Winds were also above average for winter with storm force winds on occasions. Dublin Airport’s winter mean wind speed of 14.4 knots (26 km/h) was its highest since 1943 (71 years). A new record maximum wave of 25 metres was reported at the Kinsale Energy Gas Platform on 12 February.

France was hit by repeated storm fronts. Precipitation for the whole country for the whole season was 40% above the long-term average: On the Atlantic coast, Brittany received the highest rainfall since 1959, causing flooding, as did Provence-Alpes-Côte-d'Azur in southeastern France. It was the second equal warmest winter on record since 1900.

Spain was also impacted by repeated frontal systems, causing high winds especially in Galicia. Average precipitation during winter was 20% above the long-term normal, but with big geographic differences. Some Atlantic coastal regions received above 50% more than normal values, whereas Mediterranean regions were much drier than average.

In Italy, heavy precipitation set new records and led to some flooding. On 31 January, the station at Rome Fiumicino reported a new record value of 164 mm. A number of stations also broke monthly precipitation records.

During 2013 Turkey received 13% less precipitation than normal and it was affected by dry condition with a drought conditions throughout winter, when it normally receives most of its rain. The western part of the country was exceptionally dry. The is meteorological drought conditions have risk to convert to the agricultural and hydrological drought due to this dry condition coming from the year 2013 which there was below normal precipitation (13%).

Jordan was also impacted by dry weather between mid-December and the start of March, as were neighbouring countries. Many parts of Jordan received less than half the average amount of rainfall. The situation improved thanks to rainfall in March.

Winter witnessed both unusual warmth and extreme cold temperatures, according to Roshydromet. The winter as a whole across Russia was 1.7 °C warmer than the long-term average.

The first half of January was very warm in the first half of European Russia and the second half was exceptionally cold, influenced by the Polar Vortex. Temperatures fell to -52°C in late January in the northeast of the European part. Strong frosts of -54°C to -59°C were observed in the northern Ural and in central and northern Siberia. The January mean temperature was -4°C to -11 °C below average in European Russia.

During the 2013/2014 winter, the mean temperature over China was -2.9℃ (0.5℃ higher than the normal). Average precipitation was 39.2 mm, 4% less than the normal, according to the China Meteorological Administration National Climate Centre, 125 stations in Northeast, North China, Xinjiang, Inner Mongolia, etc. witnessed extreme drops in temperature in a single day; 96 stations in Tibet, Sichuan, Yunnan, etc. recorded extreme temperature drops in consecutive days. Over South China, North China and the eastern part of Southwest and other places, 16 stations equaled or broke their records of no precipitation days, including Gaotai Station in Gansu with 163 days and Fengning Station in Hebei with 107 days.

Large areas of central and eastern China were affected by fog or haze during winter. During February 20-26, 2014, North China was shrouded in prolonged fog and haze weather. The total areas under haze reached 2.07 million km2 at the worst, involving 11 provinces in northern China.

Japan: The Pacific side of northern and eastern Japan experienced two heavy snowfall events in mid-February 2014, according to the Japan Meteorological Agency’s Tokyo Climate Centre. Snow fell over wide areas mainly on the Pacific side from western to northern Japan and in particular, some parts of Tohoku region (northern Japan) and Kanto/Koshin region (eastern Japan) experienced record-breaking snowfall from 14 to 15 February. Northern Japan was also hit by heavy snowfall and severe snowstorm from 15 to 19 February. New records of maximum snow depth were set at 18 stations in northern Japan and Kanto/Koshin region (stations with statistics over 10 years). In Tokyo, the maximum snow depth of 27 cm was observed (tied for eighth since 1875). According to the Cabinet Office, the event claimed 26 lives across the country, with a heavy socio-economic impact.

A cold system coming in from Russia and Eastern Europe caused an abrupt fall in temperature over Iran and Afghanistan and heavy snowfall from the north coastal provinces to the Caspian Sea on 31 January, lasting for one week. The Islamic Republic of IranMeteorological Organization said that in Mashad, northeast Iran, the maximum temperature fell from +20°C to -10°C and the minimum from +11°C to -17.5°C in this period. The north of the country faced a rare heavy snowfall and bitterly cold air. At the meteorological station of Ramsar city, south of the Caspian Sea, temperatures fell by 15 to 20°C. A maximum 24-hour precipitation of 93mm was recorded on 1 February, while the equivalent four-day precipitation reached up to 170mm in the station. Resultant snowfall depth recorded 120cm on 4 February. Monthly mean temperatures were low in February from Iran to Kazakhstan.

The Southern Hemisphere had its sixth warmest summer on record, according to the U.S. National Climatic Data Center. Much of South America, central Australia, and large parts of central Africa were much warmer than average.

Australia had its hottest year on record in 2013, with persistent and widespread warmth throughout the year leading to record-breaking temperatures and several severe bushfires. This trend continued into the first 10 days of February 2014. The Bureau of Meteorology of Australia said that a significant heatwave affected much of the central and eastern interior of Australia over the New Year period in late 2013/early 2014. This was followed by one of the most significant multi-day heatwaves on record affected southeast Australia over the period from 13 to 18 January 2014. Precipitation was above normal in February in many parts of the country.

Some parts of Peninsula Malaysia were inundated with flood due to widespread of rainfall for about 2 weeks in December. On the contrary, the monthly rainfall amount was extremely below-average in February. Besides that, most parts of the country were affected by unusual cold temperatures in the first half of January, mainly over the northern portion of Peninsula Malaysia. Thailand was also impacted.

Argentina: The period of unusual heat which started in December 2013 continued through January and into February, especially in central and northern regions, with a number of local heat records being set, according to Argentina’s National Meteorological Service. In the month of February, intense storms caused torrential rain, especially in central and northern Argentina. A number of stations reported rainfall of more than twice the monthly February average, including new monthly records for February.

In neighboring Paraguay, an all-time record 222 mm of rain inundated the capital city of Asuncion on February 27th.

Heavy seasonal rains starting in January triggered floods and landslides in Bolivia, prompting the government to declare a national state of emergency on 27 January. As of 10 March, 68,000 families were affected according to the U.N. Country Team in Bolivia.

Much of Chile was extremely dry during February.

Algeria. Southern regions in the Sahara saw a number of extreme events. From 20-31 December, the central Sahara area received a total of 57 mm (at the El Goléa station), compared to the annual average of 40 mm, and the December norm of .02 mm. On 30 January, snow fell for the first time since 2003 on the Assekrème Mountains (2,700 m) in the central Sahara, and on an unprecedented second occasion again on 28 February, according to the Office National de la Météorology of Algeria.

In Zimbabwe, heavy rains in late January and early February caused some casualties, and displacement of people. The worst affected areas were Masvingo province and Matabeleland North. Mozambique and Madagascar also suffered from flooding during the seasonal rains. In Burundi, heavy rain on 9 February caused flash floods and many casualties in the capital Bujumbura.

The role of climate change

There is no definitive answer about the contribution of human-induced climate change. No single weather event can prove or disprove global climate change.
Natural variability – including so-called planetary waves, which disturb atmospheric pressure and wind patterns across large geographical domains and can result in opposite temperature signals and different extreme precipitation features across the Atlantic – also influences our climate. Much research has been conducted into attribution of extreme events, but much more needs to be done.

Research is also being conducted into whether the melting of Arctic ice is leading to changes in the speed and flow of the Jet Stream, resulting in more extreme cold in the mid-latitudes and some extreme warmth in the far North – such as was witnessed this year in the USA and the Arctic. Recent studies have also suggested an increase in the intensity of Atlantic storms that take a more southerly track, typical of this winter's extreme weather in Western Europe.

There is also an increasing body of evidence that shows that extremes such as heavy rainfall events, heatwaves and droughts are becoming more intense, and that the rate of increase is consistent with what is expected from the fundamental physics of a warming world.