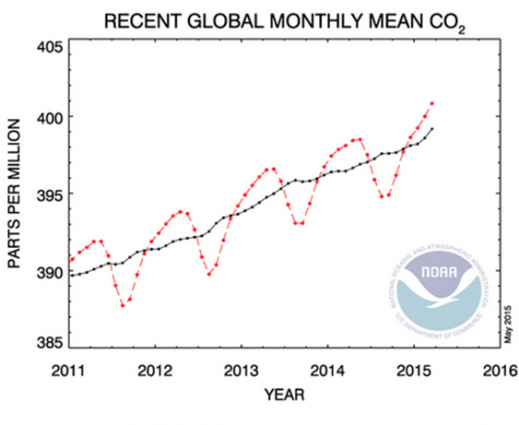 The monthly global average concentration of carbon dioxide in the atmosphere exceeded 400 parts per million in March 2015 for the first time on record, according to the U.S. National Oceanic and Atmospheric Administration (NOAA).

This threshold is of symbolic and scientific significance and reinforces evidence that the burning of fossil fuels and other human activities are responsible for the continuing increase in heat-trapping greenhouse gases warming our planet.

The latest finding highlights the relentless rise of concentrations of greenhouse gases in the atmosphere. All of the northern hemisphere monitoring stations contributing to the World Meteorological Organization (WMO) Global Atmosphere Watch (GAW) network passed the threshold of 400 ppm monthly average  atmospheric CO2 concentrations in April 2014 during the seasonal maximum. This maximum occurs early in the northern hemisphere spring before vegetation growth absorbs CO2.

NOAA’s report from its Global Greenhouse Gas Reference Network, which constitutes substantial part of the GAW observational network, issued on Wednesday marks the first time that the global monthly average within their network – including stations in the southern hemisphere – has crossed 400 ppm, with a March value of 400.8 ppm.

"This should serve as yet another wakeup call about the constantly rising levels of greenhouse gases which are driving climate change. If we are to preserve our planet for future generations, we need urgent action to curb emissions of these heat trapping gases", said WMO Secretary-General Michel Jarraud. "Time is running out."

CO2 remains in the atmosphere for hundreds of years. Its lifespan in the oceans is even longer. It is the single most important greenhouse gas emitted by human activities. It was responsible for 85% of the increase in radiative forcing – the warming effect on our climate - over the decade 2002-2012. CO2 absorption by the oceans causes ocean acidification.

WMO’s Greenhouse Gas Bulletin showed that between 1990 and 2013 there was a 34% increase in radiative forcing because of concentration increase of long-lived greenhouse gases such as carbon dioxide (CO2), methane and nitrous oxide.