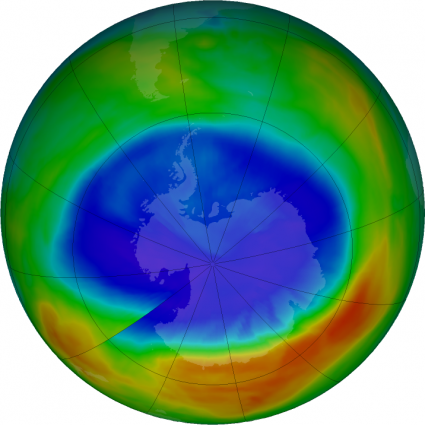 Countries are meeting in Montreal this week to mark the 30th anniversary of the world’s most successful ever environment agreement, which halted the destruction of the protective ozone layer.

The 197 parties to the Montreal Protocol on Substances which Deplete the Ozone Layer  are gathered in the Canadian birthplace of the treaty. This achieved a near 99 per cent phase-out of ozone destroying substances like chlorofluorocabons (CFCs) and hydrochlorofluorocarbons (HCFCs), once commonly used in products ranging like refrigerants and aerosols.

The conference also marks another major milestone - the achievement of the threshold for entry into force of the Kigali Amendment, which seeks to phase down climate-warming hydrofluorocarbons (HFCs) while still protecting the ozone layer.

As a result of the concerted international action, the ozone layer is on track to recovery to 1980 benchmark levels by the middle of this century in mid-latitudes and the Arctic, and slightly later in the Antarctic.

“The World Meteorological Organization joins the rest of the international community in celebrating the success of the Montreal Protocal which has proved to be a great win-win for both the ozone layer and for our climate,” said WMO senior ozone scientist  Geir Braathen.

WMO and its Global Atmosphere Watch network supports the UN Environment Programme and its Ozone Secretariat in monitoring the state of the ozone layer, which shields us from harmful levels of ultraviolet rays. The Ozone Secretariat estimates that up to 2 million cases of skin cancer will have been prevented globally each year by 2030.

The 2017 Antarctic ozone hole reached a maximum, of 19.6 million km2 on 11 September, the smallest since 2002. This was due to naturally occurring variability caused by warmer-than-average stratospheric weather conditions.

During the first part of the season, up until the second week of September, the size of the Antarctic ozone hole was close to the 1979-2016 average. However, the polar vortex became unstable in the third week of September, with temperatures at the polar cap (60-90°S) rising 5-7°C above the long-term average.

This resulted in a rapid decrease in the size of the ozone hole before a small increase around the end of September. The average area of the ozone hole through the peak of the season (7 September to 13 October) was 16.8 million km2. This is the smallest value for 15 years.

WMO and UNEP issue extensive scientific assessments for policymakers every four years. The next report is due in 2018. A meeting of Ozone Research Managers held in April 2017 concluded that integrated earth science observation systems are essential to ensure that action to protect the ozone layer also benefits the climate, given the complex and evolving interaction between the ozone layer and the climate system.Ozone-depleting substances are also powerful greenhouse gases and so their elimination has also been beneficial to the climate and has averted more than 135 billion tonnes of carbon dioxide equivalent emissions.

It is expected that this will avert up to 0.5° Celsius warming by the end of the century—while continuing to protect the ozone layer.

Chemicals known as HFCs are less damaging to the ozone layer than CFCs and HCFCs, but are powerful greenhouse gases. The recent Kigali Amendment requires countries to gradually phase down HFCs by more than 80 per cent over the next 30 years and replace them with more planet-friendly alternatives.

The Amendment is set to enter into force on 1 January 2019, having crossed the threshold of 20 ratifications on 17 November 2017.

Environment ministers from around the world will participate in a ministerial round table discussion on the theme “Montreal Protocol at 30: Identifying future opportunities and priorities” on 23 November, after the opening of the high-level segment of the meeting.