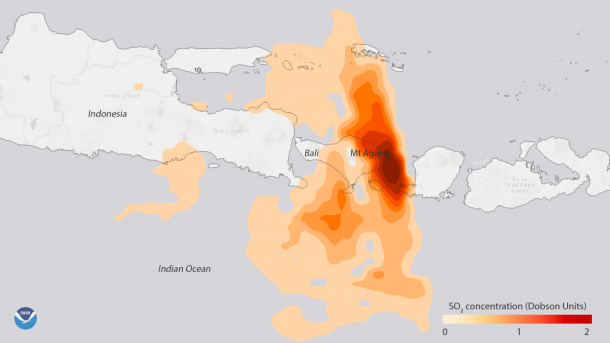 Volcanic activity at Mount Agung in Bali, Indonesia, and potential risks to air transport from volcanic ash is being closely monitored by an international network including WMO.

Indonesian authorities have been closely watching Mt Agung for weeks. On Monday the National Board for Disaster Management raised the alert level to level 4 and urged people living within 10 km of the volcano to evacuate. 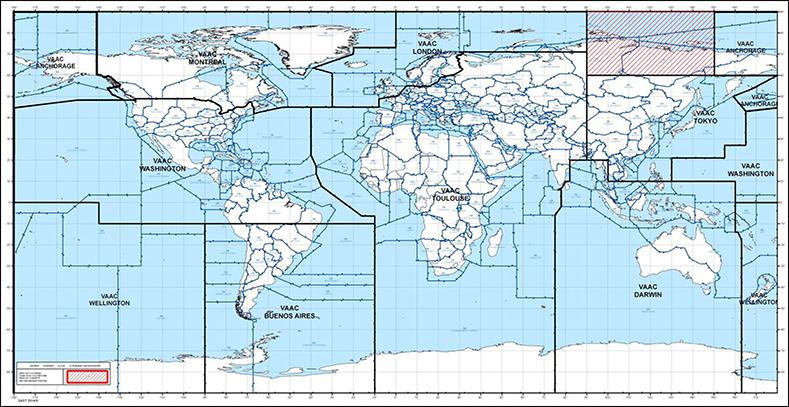 The International Civil Aviation Organization, in cooperation with WMO, oversees a framework for the  International Airways Volcano Watch (IAVW). Within this framework, nine Volcanic Ash Advisory Centres (VAACs), supported by multiple State volcano observatories around the world monitoring active or potentially active volcanoes, provide information on the location and movement of volcanic ash in the atmosphere within their areas of responsibility.

Australia’s Bureau of Meteorology operates the Darwin Volcanic Ash Advisory Centre, which is responsible for issuing volcanic ash advisory information Indonesia. Darwin VAAC works closely with the Indonesian authorities, notably BMKG, to monitor and detect the presence of volcanic ash. It is continuing to provide advice to the aviation community about the potential impact of the volcanic ash cloud following an eruption at Mount Agung on the island of Bali. Travellers are encouraged to check with their airlines about flight changes and cancellations.

A continuous volcanic eruption has been observed at Mount Agung since 25 November 2017. The height of the eruption has been steadily increasing, ash is currently observed to a height of around 25 000 feet (or 7620 metres) and a small amount of ash has fallen at Denpasar Airport and across Bali's south east. Denpasar's airport remains closed for a second day on Tuesday. Eruptions and ash falls are likely to continue

The advice the Bureau's Volcanic Ash Advisory Centre (VAAC) provides to the aviation industry relies on ground based and satellite observations, pilot reports, and sophisticated forecasting models to monitor the current location and forecast movement of volcanic ash.

During such episodes, airlines make their own decisions on when and where to fly based on their risk management approaches.

The movement, spread and dispersion of volcanic ash clouds depends on:

·       the altitude reached by the ash cloud (of primary importance);

·       the meteorological condition of the atmosphere, e.g. atmospheric stability, wind behaviour and precipitation (ash particles can be ‘rained out’); and

·       the ash concentration and the size distribution of particles—finer particles travel further and remain in the atmosphere for longer, while heavier particles fall out of the flying zone sooner

Advances in satellite technology have helped the detection and monitoring of volcanic ash. Japan’s Himawari-8 satellite, for example, is producing regularly updated imagery which can be used as a tool in decision making and risk assessment. It is worthwhile to note however that, at times, volcanic ash in the atmosphere can be obscured to meteorological cloud which can make the job of detection all the more challenging.

WMO works closely with the aviation industry and regulatory authorities to maximize air safety and efficiency. A major conference on aviation, weather and climate took place earlier in November and discussed how to boost scientific support for aviation safety, air navigation efficiency and environmental protection. The priorities include addressing the current and future impact on aviation operations of extreme weather, climate change, hazardous phenomena such as volcanic ash, space weather and geomagnetic storms.

Volcanic ash can cause major disruption for air transport. This was highlighted during the 2010 eruption of Iceland's Eyjafjallajokull volcano, which closed much of European air space for days and had a knock-on effect on airline operations around the world. Much progress has been made since 2010 to improve the monitoring and detection of volcanic eruptions and the presence and predicted movement of volcanic ash in the atmosphere. Coordination between the VAACs and State volcano observatories has also improved helping the collaborative and consistent approach by service providers. In addition, progress has been made to better understand the impacts of volcanic ash on aircraft, especially engines. In May 2017, for example, Rolls-Royce announced their position on their engine susceptibility to volcanic ash.

Volcanic eruptions are a day-to-day occurrence. WMO and its Members continue to work with aviation stakeholders to keep flight operations safe and efficient in the face of the hazards posed by volcanic ash.