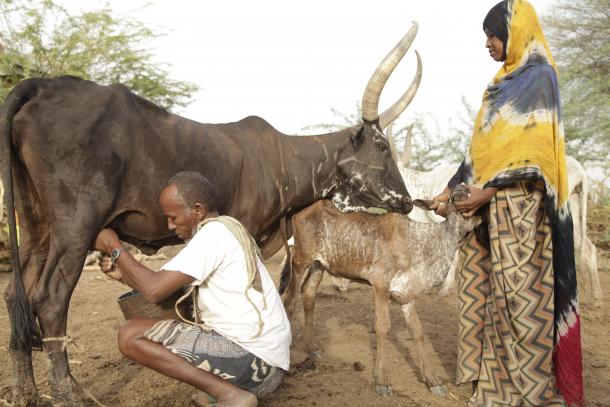 IGAD, FAO and WMO join forces to stave off impacts of climate change on agriculture

5 September 2018, Kigali –The Inter-Governmental Authority on Development (IGAD), the Food and Agriculture Organization of the United Nations (FAO) and the World Meteorological Organization (WMO) have held the inception workshop for a new project that aims to buttress the capacities of smallholder farmers in Ethiopia, Kenya and Uganda to adapt and be more resilient to the weather variability and climate change.

With USD 6.8 million funding from the Adaptation Fund, the three-year program called, “Agricultural Climate Resilience Enhancement Initiative (ACREI),” will develop the capacities of pastoral and agro-pastoral communities, who are extremely vulnerable to weather variability and climate change, to understand and appropriately use climate information to be more resilient to the negative impacts of climate change.

Speaking at the project inception workshop, Guleid Artan, Director of IGAD Climate Prediction and Applications Centre (ICPAC), said that weather-related challenges and hazards severely impact on the quantity and quality of food; and thus, pose negative impacts on the livelihoods of farmers and their dependents. Pastoral and agro-pastoral communities in the Horn of Africa, are extremely vulnerable to weather variability and climate change, where they experience droughts and floods more frequently in recent years. The risk of losing their livelihood assets due to climatic risks has been real. Enhancing the technical and financial capacities of these communities to cope and adapt to climate change and variability is thus crucial for their survival.

Cyril Ferrand, Resilience Team Leader at FAO Sub-regional Office for Eastern Africa, raised concern over increasing loss of agricultural production to drought. He remarked, “Drought affects the agriculture sector disproportionately, relative to other sectors. Over 80 percent of all damage and loss caused by drought is absorbed by agriculture, causing food insecurity and pushing malnutrition on a reversal trend”. Hence, a pragmatic action is crucially needed to build capacities of stallholder farmers against climatic shocks, to advance sustainable agricultural production.

“We are eager to be linking climate information to the local level in order to build resilience and support adaptation in the agricultural sector,” said Robert Stefanski, Chief Agricultural Meteorology Division at WMO. He further noted that the partnership among WMO, FAO and ICPAC will be very crucial in building resilience in the targeted countries.

The project inception workshop was held on the sidelines of the 50th Greater Horn of Africa Climate Outlook Forum (GHACOF) held in Kigali, Rwanda (30-31 August 2018). It provided an opportunity to raise awareness among stakeholders about the ACREI initiative as well as engage stakeholders in a discussion on its implementation strategy.

Incidences of weather variability and climate change in the Horn of Africa continue to threaten food security and the very survival of the region’s population. Rising temperatures, rainfall variability, drought, desertification, deforestation and land degradation, floods and other extreme weather events are occurring quite frequently.

The pastoral and agro-pastoral communities of Ethiopia, Kenya and Uganda have frequently faced these challenges, with limited access to information and technical support and financing for adaptation options. Hence their capacities to respond to local weather variability, forecasts and predictions is very limited.

Therefore, the new initiative, ACREI, is aiming to enhance the capacity of these communities to adapt to climate variability. It aims to develop and implement adaptation strategies that will strengthen the resilience of vulnerable smallholder farmers. It targets three countries: Ethiopia, Kenya and Uganda. The project has three main components, which include supporting community adaption practice, climate proofing of extension systems and climate informed decision making.

The three-year Program is an important partnership between WMO, FAO, ICPAC and Adaptation Fund, in building resilience at regional and local level and to ultimately improve food and nutrition security in the Horn of Africa. The ACREI project is aligned to national, regional and global goals including Africa Agenda 2063, Sustainable Development Goals particularly, Goal 2 (Zero Hunger) and Goal 13 (climate action). The programme also meets the objectives set out by the African Union endorsed Integrated African Strategy on Meteorology, developed under the auspices of the African Ministerial Conference on Meteorology (AMCOMET). AMCOMET is a joint initiative of the WMO and African Union Commission which advocates for the development, provision and uptake of weather, water and climate services that meet societal needs and serves as a coordination platform for sustainable development programmes.