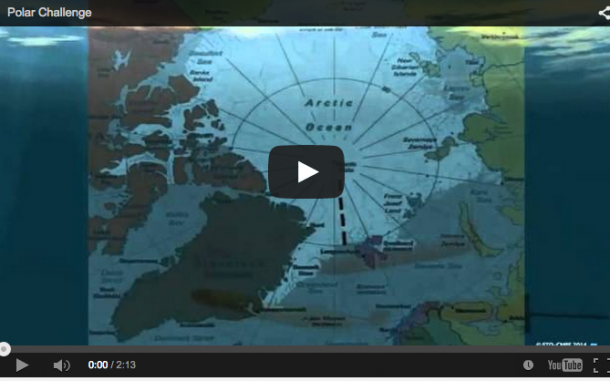 Geneva/Tromsø (19 January 2015) The World Climate Research Program (WCRP) is launching a Polar Challenge to reward the first team able to send an Autonomous Underwater Vehicle (AUV) for a 2,000 kilometer mission under the sea-ice in the Arctic or Antarctic.

The aim is to stimulate the development of a sorely-needed monitoring tool for the Polar regions and ultimately to expand scientific research capabilities and climate services in both the Arctic and Antarctic.

“The cryosphere is a major indicator of global climate change and plays a fundamental role in our climate system,” said WCRP Director David Carlson.

“Despite numerous model improvements, the reliability of long-term climate change outlooks in Polar regions is severely limited by the scarcity and cost of in situ systematic observations of the sea-ice and below to complement satellite observations,” emphasized Dr Carlson.

The Polar Challenge is being announced on the sidelines of the Arctic Frontiers conference, 18-23 January in Tromsø, Norway.

New generation AUVs such as underwater gliders provide a potential low-risk, cost-effective option to scaling up observing networks for the Polar regions.

The WCRP hopes the competition will promote technological innovation towards a future cost-effective, autonomous and scalable observing network for ice-covered ocean regions based on a fleet of such platforms, similar to what ARGO, a global network of more than 3,500 free-drifting floats, has accomplished for the open ocean.

AUVs are already used in an operational context around the world in ice-free zones, and they surface on a regular basis to get a GPS fix and to transmit environmental data. They are able to collect crucial and high quality oceanographic observations (such as temperature, salinity, chlorophyll and acidity) at lower cost compared to conventional observing systems.

But under the sea-ice, the operating range, positioning and data transmission represent major challenges for current underwater vehicles. The integration of recent progress regarding power systems and navigation techniques for example would expand the scope of applications of such vehicles, currently mainly limited to the open ocean. This would offer the potential to develop new data sets of sea-ice and under-ice properties far into unexplored territories, revolutionizing our knowledge of heat fluxes and storage, fresh water exchanges, carbon sequestration and ocean acidification in those regions.

The Polar Challenge will be at least three-fold, in terms of under-ice navigation, endurance and environmental monitoring.

The WCRP is inviting contributions from all relevant stakeholders to this important and exciting initiative.

This effort is aligned with WCRP research priorities, in particular the Grand Challenge on Cryosphere in a Changing Climate and the Grand Challenge on Regional Sea level Rise. It will also contribute to World Meteorological Organization’s Polar initiatives and is expected to benefit the wider stakeholder community (weather, ocean, environment, safety, transport, energy, tourism, etc).

The World Climate Research Programme is sponsored by the World Meteorological Organization (WMO), the International Council for Science (ICSU) and the Intergovernmental Oceanographic Commission (IOC) of UNESCO.