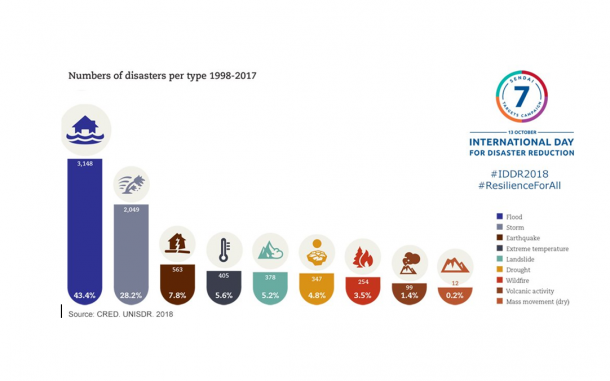 The last twenty years have seen a dramatic rise of 151% in direct economic losses from climate-related disasters, according to a new report released by the UN Office for Disaster Risk Reduction (UNISDR).

Reducing economic losses from disasters is a key target of the Sendai Framework for Disaster Risk Reduction, and also the theme of the International Day for Disaster Reduction on 13 October.

The high economic cost of disasters was underlined, once again, by the devastation wreaked by Hurricane Michael, which hit the Florida panhandle as a powerful category 4 storm on 10 October. It was one of the strongest ever tropical cyclones to strike the United States of America and inundated coastal town, devastated infrastructure and caused major disruption to transport and energy. The death toll, initially in single figures, is expected to rise. 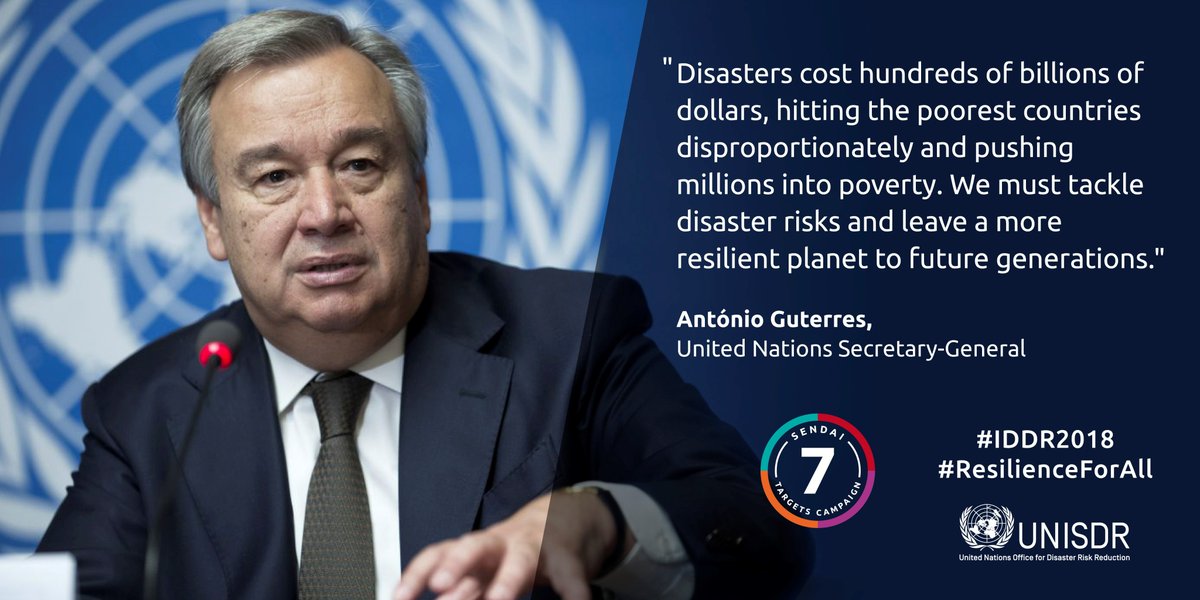 During this period, 1.3 million people lost their lives and 4.4 billion people were injured, rendered homeless, displaced or in need of emergency assistance. 563 earthquakes, including related tsunamis, accounted for 56% of total deaths or 747,234 lives lost

In the period 1998-2017, disaster-hit countries reported direct economic losses of US$2,908 billion of which climate-related disasters accounted for US$2,245 billion or 77% of the total.

This compares with total reported losses for the period 1978-1997 of US$1,313 billion, of which climate-related disasters accounted for US$895 billion or 68%.

In terms of occurrences, climate-related disasters also dominate the picture, accounting for 91% of all 7,255 major recorded events between 1998 and 2017. Floods, 43.4%, and storms, 28.2%, are the two most frequently occurring disasters.

The report concludes that climate change is increasing the frequency and severity of extreme weather events, and that disasters will continue to be major impediments to sustainable development so long as the economic incentives to build and develop hazard-prone locations outweigh the perceived disaster risks.

This was also emphasized in the report by the Intergovernmental Panel on Climate Change on Global Warming of 1.5°C.

The UNISDR report “Economic Losses, Poverty and Disasters 1998-2017” drills down into the Emergency Events Database (EM-DAT) maintained by the Centre for Research on the Epidemiology of Disasters (CRED) at the Catholic University of Louvain, Belgium.

The human toll of disasters was highlighted by the earthquake and tsunami which shattered the Indonesian town of Palu on 28 September. UN Secretary-General Antonio Guterres visited the town on 12 October.

"Here in Palu, I saw first-hand the destruction caused by the recent earthquake and tsunami," Guterres tweeted. "To the many people I saw and spoke to: your strength and resilience are remarkable. The U.N. is with you to support government-led rescue and relief efforts."

Tsunami waves with a height of the order of 3 metres inundated coastal areas of Sulawesi within 8 – 10 minutes of the earthquake. There are some indications that this was a complex tsunami event, as the observed wave heights have not yet been explained.

UNESCO’s Intergovernmental Oceanographic Commission (IOC), which is responsible for the international coordination of regional tsunami early warning and mitigation systems, said it would work with Indonesia following the disaster.

WMO has been supporting the IOC to help establish and standardize Tsunameters for these critical tsunami warning services since inception, and the WMO Information System (WIS) contributes to the communication infrastructure for tsunami warnings.

Since 2012 there has been a joint task force of the International Telecommunication Union, IOC and WMO to investigate the potential use of commercial underwater telecommunication cables equipped with sensors for tsunami detection.

WMO remains committed to work together with all partners and Members to reduce coastal hazards and strengthen multi hazard early warning systems.