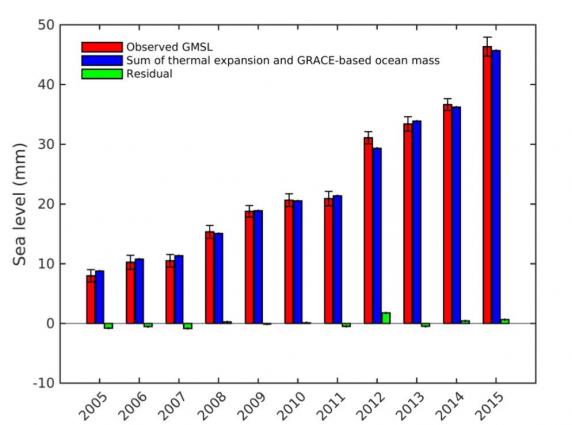 Over the last 50 years more than 90 % of the excess heat excess accumulated in the climate system because of greenhouse gas emissions has been stored in the ocean. The rest has been warming the atmosphere and continents, and melting sea and land ice.

Sea level rise is one of the most severe consequences of climate change from human activities, with potential major impacts on coastal societies. Determining the magnitude and importance of each component is crucial, though some are better known and easier to calculate than others.

The international community, through the World Climate Research Programme’s Grand Challenge on Regional Sea Level and Coastal Impacts has recently published an extensive study assessing the various datasets used to estimate components of sea-level rise since the start of the altimetry era in 1993. These datasets are based on the combination of a broad range of space-based and in situ observations, model estimates, and algorithms

The study involved scientists from around the world.

Sea level rise is one of seven global climate indicators which describe the changing climate. The others are temperature, ocean heat, greenhouse gases, ocean acidity, glaciers and sea ice.

The study is available here