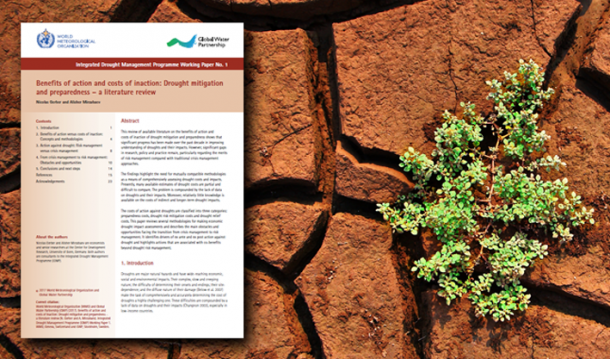 Significant progress has been made over the past decade in improving understanding of droughts and their impacts. However, several questions remain, including the real costs to a country’s economy, and whether the price of preparing for droughts is worth it. A new study released by the World Meteorological Organization and Global Water Partnership seeks to answer these questions.

The working paper reviewed an extensive range of literature on the benefits of action and costs of inaction of drought mitigation and preparedness. It was prepared for the Integrated Drought Management Programme as part of efforts to support the development of more proactive drought policies and better predictive mechanisms.

“Identifying not only the costs of inaction, but also the immediate and long term benefits of being better prepared for drought will be crucial in making a convincing case for mitigating drought risks. This study on the current state of the knowledge will be an important contribution in moving towards a more proactive approach to address drought risks” said Oyun Sanjaasuren, Chair of the Global Water Partnership.

“Unlike floods and tropical cyclones, drought is a slow onset disaster. But – as the unfolding humanitarian crisis in the Horn of Africa shows - its impact is just as devastating in terms of human suffering and loss of livelihoods. We need to move away from the traditional piecemeal, crisis-driven response and adopt modern tools, in the form of integrated drought management policies, to increase climate resilience,” noted Robert Stefanski, WMO’s Head of the Integrated Drought Management Programme Technical Support Unit.

The paper reviews economic drought impact assessments and describes the main obstacles and opportunities facing the transition from crisis management to risk management. Presently, many available estimates of drought costs are partial and difficult to compare. Too little is known about the costs of indirect and longer-term drought impacts because of lack of data.

Droughts are a recurrent and normal feature of almost any climate, even in comparatively water-rich countries. One study indicates that that about 10% of the territory of the United States is affected by drought at any given time. Between 2000 and 2006, 15% of the European Union’s land area was affected by drought. Droughts have occurred in different locations across Vietnam in 40 out of the past 50 years.

The countries that are most vulnerable to Gross Domestic Product losses due to droughts are in eastern and southern Africa, South America, and South and Southeast Asia, according to one study cited in the working paper.

It features a case study on Brazil, where droughts, especially in the northeast, are expected to increase in frequency and intensity as a result of global climate change. Drought and climate change combined with existing pressure on freshwater availability and quality are likely to lead to new and increased water management challenges. These have been recognized by the Brazilian water community, including resource managers and users, researchers and policymakers.

Drought preparedness and risk mitigation helps lower the eventual drought relief costs. For example, the US Federal Emergency Management Agency (FEMA) estimated that the US would save at least USD 2 on future disaster costs from every USD 1 spent on drought risk mitigation, the study shows.

“Given the scale of the issue and the likely drought trends under climate change, it is essential to have a well-defined strategy for mitigating the impacts of drought and enhancing drought preparedness,” conclude the paper’s authors, Nicolas Gerber and Alisher Mirzabaev.

The working paper was released ahead of a workshop on the benefits and costs of drought mitigation and preparedness organized by the World Bank, the National Oceanic and Atmospheric Administration (NOAA), the World Meteorological Organization (WMO) and Global Water Partnership (GWP) Integrated Drought Management Programme on 26 and 27 April in Washington DC, USA.

It will explore the benefits of actions and the costs of inaction of drought preparedness, which includes the evolution of resilience across time scales, namely how lessons on pro-active drought management have been learned (and which actions were taken) over time and in different sectors.

The working paper is available at http://www.droughtmanagement.info/literature/IDMP_BACI_WP.PDF