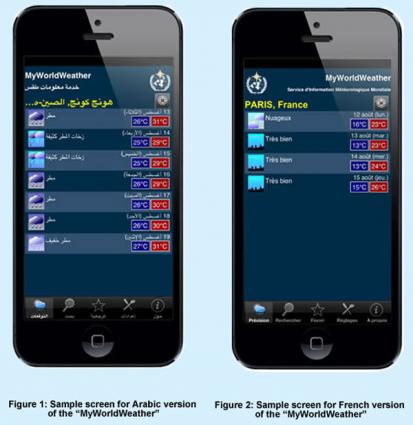 The Hong Kong Observatory (HKO) has launched a new version of mobile App "MyWorldWeather." With the assistance of the Directorate General of Civil Aviation and Meteorology of Oman, Mètèo-France, and the World Meteorological Organization (WMO), MyObservatory incorporates support for Arabic and French languages. The user interface of the app has also been enhanced to enable user to select the home city, whose weather forecast would be automatically displayed on startup screen of the app.

The "MyWorldWeather" app features the World Weather Information Service under the auspices of the WMO. The mobile app was first launched in October 2011, and currently supports nine languages: Arabic, Chinese, English, French, German, Korean, Portuguese, Polish and Spanish. It was the world's first ever weather service providing official city weather forecasts around the world for people on the move. At present, official weather forecasts for about 1,700 cities supplied by 133 WMO members are available on the "MyWorldWeather".

"MyWorldWeather" is a free mobile app available for iPhone and Android platforms.