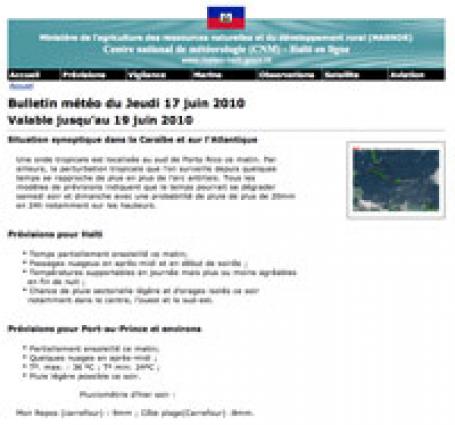 The National Meteorological Centre (CNM) of Haiti launched its website www.meteo-haiti.gouv.ht to provide and disseminate information and warnings to all users including UN agencies, NGOs, disaster affected communities and media.

Following the earthquake of 12 January 2010 in Haiti, which caused considerable loss of lives and damage to all infrastructures including CNM, WMO Members have joined forces to re-establish operational meteorological services to help prevent further disasters during the hurricane season (June-December 2010). This is an exemplary model of cooperation of WMO and its Members that could be replicated in other similar situations in the future.