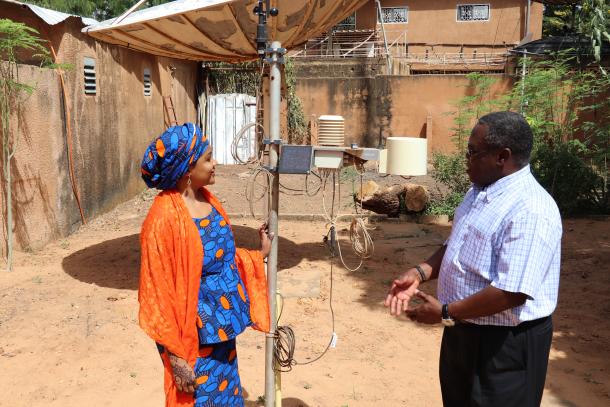 Every year, heavy rains cause floods across Niger. Since June, over 56 people have lost their lives with many more affected according to the Civil Protection Directorate at the Ministry in charge of Interior Affairs and Public Security. For these events, in particular for flash floods, national and local authorities were unprepared and were not able to alert the population at risk and to activate response plans.

A joint World Meteorological Organization-World Bank mission comprising experts in meteorology, hydrology, civil protection, food security and geospatial data management met from 9 to 13 October 2017 with five of the key institutions in Niger that play a role in the country’s early warning systems. The five institutions are the Ministry for Humanitarian Action and Disaster Management (MAHGC), the National Meteorological Service (DMN), the National Mechanism for Food Crisis Management (DNPGCA), the Civil Protection Directorate (DGPC) and the National Hydrology Service (DGRE).

The purpose of the mission was to advance the implementation of the project funded by the Climate Risk and Early Warning System (CREWS) initiative which aims to facilitate the delivery of timely, impact-based warnings to at-risk populations and activate location-specific preparedness plans in Niger by 2020. The three-year CREWS project entitled “Niger Strengthening Early Warning Services” is supported financially by Australia, France, Germany, Luxembourg and the Netherlands. CREWS is a partnership of the World Meteorological Organization (WMO), the World Bank and its Global Facility for Disaster Reduction and Recovery of the World Bank (GFDRR) and the UN Office for Disaster Risk Reduction (UNISDR).

Minister Magagi Laouan (MAHGC), who leads the national implementation of the project, noted “In order to reach our objectives, all the institutions involved, through a participative process, have identified needs regarding their capacity, including technical, organizational and equipment”. According to the Minister, “Through CREWS, Niger has a three-year plan that will result in standard operating procedures and strengthened capacity for flood early warning and response that can be extended to other hazards as well”.

Advances have been made in identifying areas exposed to flood risk, for riverine floods, such as when the Niger river overflows its embankments, and for flash floods triggered by extreme rain events. Jean Baptiste Migraine, the Team Leader at the World Bank states: “We are building on an ongoing project managed by the Government, the Disaster Risk Management and Urban Development Project, funded by the World Bank”. “This project is enhancing information on vulnerable populations that allow better targeting of the flood warning systems and improving risk-mitigation infrastructure”.

Advances are made by the CREWS project to allow local access to predictions and forecasts made available by global and regional specialized centers. Abdoulaye Harou, Chief, Data-Processing and Forecasting Division at WMO, spent the week working with the DMN and regional institutions based in Niamey to define priorities. “We identified the need for higher internet speed to download global and regional models, including precipitation predictions, and the training of forecasters at the DMN in the interpretation and use of Numerical Weather Prediction (NWP) and Ensemble Prediction Systems (EPS) outputs as immediate project priorities”. “Support is also being provided to DGRE to strengthen its hydrological monitoring and forecasting capacities”, according to Mr Harou.