NOAA and JMA: June is hottest June on record 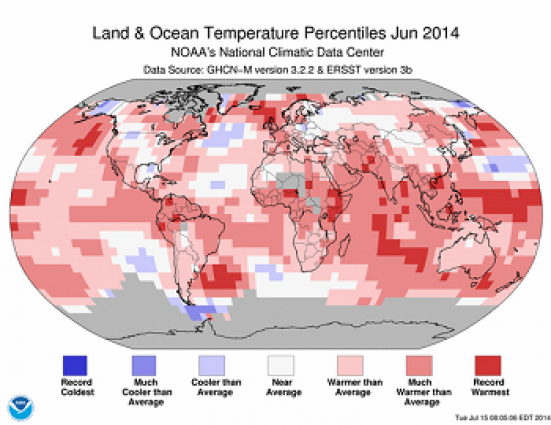 NOAA and JMA: June is hottest June on record

The globally averaged temperature over land and ocean surfaces for June 2014 was the highest for June since record keeping began, driven by record sea surface temperatures, according to the U.S. National Oceanic and Atmospheric Administration (NOAA) and the Japan Meteorological Agency’s Tokyo Climate Center. May was also the hottest May on record.

NOAA said the combined average temperature over global land and ocean surfaces for June 2014 was 16.22°C, or 0.72°C above the 20th century average of 15.5°C. This surpasses the previous record, set in 2010, by 0.03°C. Nine of the ten warmest Junes on record have all occurred during the 21st century, including each of the past five years. The margin of error associated with this temperature is 0.09°C.

WMO uses a combination of datasets to compile its annual Statement on the Global Climate.

The high May and June monthly temperatures were recorded in advance of the forecast development of an El Niño event, which has a warming tendency. Tropical Pacific Ocean temperatures warmed to weak El Niño thresholds in June, but atmospheric conditions remained neutral, according to the WMO El Niño Update.

NOAA said there was record warmth across part of southeastern Greenland, parts of northern South America, areas in eastern and central Africa, and sections of southern and southeastern Asia. New Zealand had its hottest June on record.Similar to May, scattered sections across every major ocean basin were also record warm. Notably, large parts of the western equatorial and northeastern Pacific Ocean and most of the Indian Ocean were record warm or much warmer than average for the month. A few areas in North America, Far East Russia, and small parts of central and northeastern Europe were cooler or much cooler than average.

The first six months of the year – January to June – tied as the third warmest on record, according to NOAA.