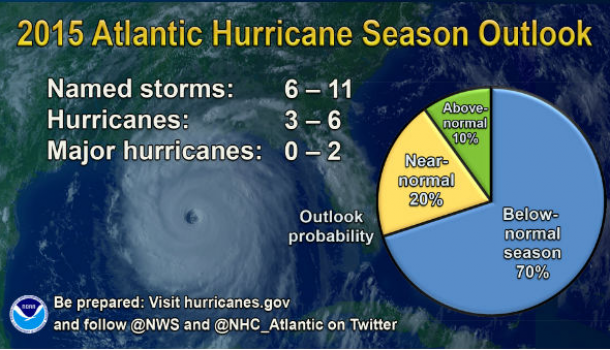 With the new hurricane season comes a new prototype storm surge watch/warning graphic from NOAA’s National Hurricane Center, intended to highlight areas along the Gulf and Atlantic coasts of the United States that have a significant risk of life-threatening inundation by storm surge from a tropical cyclone. The new graphic will introduce the concept of a watch or warning specific to the storm surge hazard. Storm surge is often the greatest threat to life and property from a tropical cyclone.

The new graphic reflects the outcome of the previous two sessions of the Regional Association IV Hurricane Committee and is in compliance with WMO's strategy to promote impact-based forecasting and risk-mapped warnings.

“A below-normal season doesn’t mean we’re off the hook. As we’ve seen before, below-normal seasons can still produce catastrophic impacts to communities,” said NOAA Administrator Kathryn Sullivan, Ph.D., referring to the 1992 season in which only seven named storms formed, yet the first was Andrew – a Category 5 Major Hurricane that devastated South Florida.