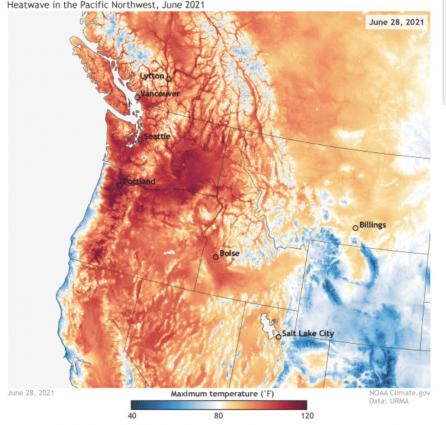 Pacific Northwest areas of the US and Canada saw temperatures that broke records by several degrees, including a new all-time Canadian temperature record of 49.6°C (121.3°F) in the village of Lytton - well above the previous national record of 45°C (113°F). Shortly after setting the record, Lytton was largely destroyed in a wildfire.

North America had its warmest June on record, according to the monthly bulletin from Copernicus Climate Change Service implemented by the European Centre for Medium-Range Weather Forecasts (ECMWF).

Every heatwave occurring today is made more likely and more intense by climate change. To quantify the effect of climate change on these high temperatures, the rapid attribution study analysed the observations and computer simulations to compare the climate as it is today, after about 1.2°C (2.2°F) of global warming since the late 1800s, with the climate of the past, following peer-reviewed methods.

The study was conducted by 27 researchers, including scientists from universities and meteorological agencies in Canada, the US, Germany, the Netherlands, Switzerland, France and the UK, as part of the World Weather Attribution group. This is an international collaboration that analyses and communicates the possible influence of climate change on extreme weather events, such as storms, extreme rainfall, heatwaves, cold spells, and droughts.

"What we are seeing is unprecedented. You're not supposed to break records by four or five degrees Celsius (seven to nine degrees Fahrenheit). This is such an exceptional event that we can't rule out the possibility that we're experiencing heat extremes today that we only expected to come at higher levels of global warming,” said Friederike Otto, of the Environmental change Institute at the University of Oxford.

"While we expect heatwaves to become more frequent and intense, it was unexpected to see such levels of heat in this region. It raises serious questions whether we really understand how climate change is making heat waves hotter and more deadly," commented Geert Jan van Oldenborgh of Royal Netherlands Meteorological Institute.

Until overall greenhouse gas emissions are halted, global temperatures will continue to increase and events like these will become more frequent. For example, even if global temperature rise is limited to 2°C (3.6°F), which might occur as soon as 2050, a heatwave like this one would occur about once every 5 to 10 years, the scientists found.

An alternative possible explanation is that the climate system has crossed a non-linear threshold where a small amount of overall global warming is now causing a faster rise in extreme temperatures than has been observed so far — a possibility to be explored in future studies. This would mean that record-breaking heatwaves like last week’s event are already more likely to happen than climate models predict. This raises questions about how well current science can capture the behaviour of heat waves under climate change.

The event sends a strong warning that extreme temperatures, far outside the temperature range currently expected, can occur at latitudes as high as 50°N, a range that includes all of the contiguous US, France, parts of Germany, China and Japan. The scientists warn that adaptation plans should be designed for temperatures well above the range already witnessed in the recent past.

“In the United States, heat-related mortality is the number one weather-related killer, yet nearly all of those deaths are preventable. Heat action plans can reduce current and future heat-related morbidity and mortality by increasing preparedness for heat emergencies, including heatwave early warning and response systems, and by prioritizing modifications to our built environment so that a warmer future does not have to be deadly.” - Kristie L. Ebi, Center for Health and the Global Environment, University of Washington.

"It is amazing to see what we achieved in just over a week, with 27 scientists and local experts involved in this rapid attribution from research institutes and meteorological agencies. Combining knowledge and model data from around the world raises confidence in the extensive study results.” - Sjoukje Philip & Sarah Kew, study leads, Royal Netherlands Meteorological Institute (KNMI).