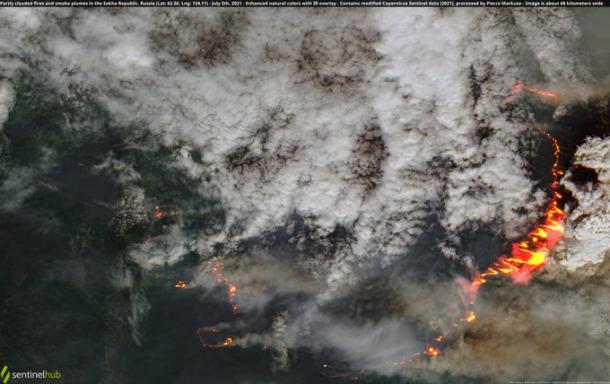 The 2021 Boreal wildfire season in the Northern Hemisphere is flaring up, with a large and increasing number of intense fires; most notably across northeastern Russia, western Canada and the western United States.

High temperatures and severe drought during recent weeks may be contributing to a higher number of more intense fires.

There is growing evidence that climate change increases the frequency and/or severity of fire weather around the world. Land management alone cannot explain recent increases in wildfires, according to a 2020 update from internationally acclaimed scientists.

The global observation system has, in turn, been greatly expanded over the last 20 years, thanks to advances in satellite technology which make it possible to detect and monitor fire dangers.

In addition to the direct threat from burning, wildfires also release harmful pollutants including particulate matter and toxic gases such as carbon monoxide, nitrogen oxides, and non-methane organic compounds into the atmosphere.

Particles and gases from burning biomass can be carried over long distances, affecting air quality in regions far away. The WMO 2021 Aerosols Bulletin therefore focussed on fires.

The Copernicus Atmosphere Monitoring Service (CAMS) issued an update on 6 July on fire activity in the northern hemisphere. CAMS provides the latest information on the location, intensity and estimated emissions of wildfires around the world, as well as the transport of smoke emissions by winds and the composition of the smoke. This helps to identify potential hotspots and increase understanding why particular fires broke out and their impacts on atmospheric composition.

In the last two years, CAMS has observed increases in the numbers of fires and related emissions in the far northeast of Russia, including in the Arctic Circle. So far this year, activity in the Arctic has not been at the same unprecedented scale as in 2019 and 2020, but the number of fires and estimated daily emissions have been increasing in recent days.

Wildfires in the Sakha Republic of Russia, in the far northeast of the country, have been increasing through late June and early July. Compared to the last two years, which saw widespread wildfire activity from the second week of June, fire activity started later, in the last week of the month.

At that point, the number of burning fires rapidly increased and, in the last few days of the month, were comparable to the levels seen in 2019 and 2020. A large plume of smoke with high values for aerosol optical depth has stayed over the region, with some transport towards the Arctic Ocean and out to the North Pacific Basin.

The last week of June witnessed soaring temperatures and a record-breaking heatwave in western Canada. Alongside this has been the rapid development of significant, and destructive, wildfires. The intensity of the fires has led to the development of pyroconvection and lightning. The CAMS GFAS data for British Columbia show a clear increase in the daily total FPR, well above the 2003-2020 average, at the very end of June.

Severe drought conditions across large regions of the western US are behind ‘very’ to ‘extreme’ levels of fire danger. The most significant wildfires so far have been in Arizona, New Mexico and Utah, but if conditions persist, fires are anticipated to increase in neighbouring states; especially California. The global fire assimilation system (GFAS) uses fire radiative power (FRP) observations from satellite-based sensors to produce daily estimates of emissions from wildfires and biomass burning. Latest GFAS time series for this region shows daily total FRP well above the 2003-2020 average since the first week of June.