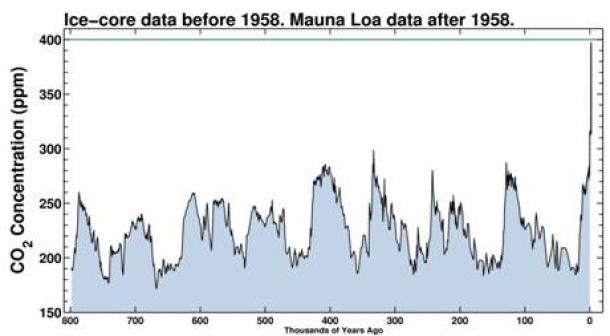 Observed concentrations of carbon dioxide (CO2) in the atmosphere have exceeded the symbolic 400 parts per million (ppm) threshold at several stations of the World Meteorological Organization’s Global Atmosphere Watch network. This is a wakeup call about the constantly rising levels of this greenhouse gas, which is released into the atmosphere by fossil fuel burning and other human activities and is the main driver of climate change. Carbon dioxide remains in the atmosphere for thousands of years, trapping heat and causing our planet to warm further, impacting on all aspects of life on earth.

On May 9, 2013, the daily mean concentration of carbon dioxide in the atmosphere of Mauna Loa, Hawaii, recorded a reading of 400.03 ppm, according to the U.S. National Oceanic and Atmospheric Administration. Mauna Loa is the oldest continuous atmospheric measurement station in the world and so is widely regarded as a benchmark site in the Global Atmosphere Watch.