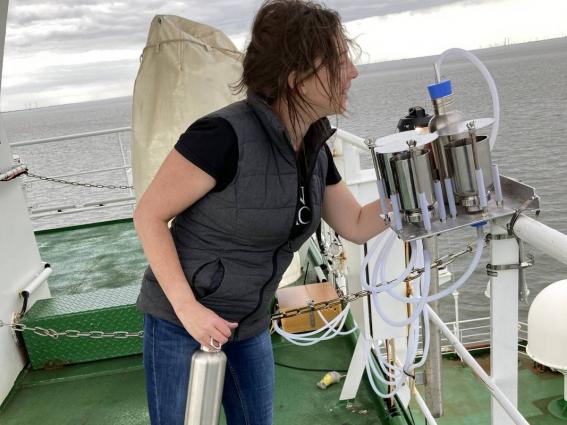 A new international study has focussed the spotlight on the transport of micro- nano plastic particles between the atmosphere and the ocean – a growing challenge which poses risks to human, marine and ecosystem health. It calls for greater observations and data exchange in view of the many unknowns.

Plastic particles have now been detected in virtually all spheres of the environment, e.g. in water bodies, the soil and the air. Via ocean currents and rivers, the tiny – or nano - plastic particles can even reach the Arctic, Antarctic or ocean depths.

A new overview study has now shown that wind, too, can transport these particles great distances – and much faster than water can: in the atmosphere, they can travel from their point of origin to the most remote corners of the planet in a matter of days.

In the journal Nature Reviews Earth and Environment, an international team of researchers describes how microplastic finds its way into the atmosphere and how it is subsequently transported. The study outlines a global strategy for creating a seamless, intercomparable database on the flow of micro- and nanoplastic between the ocean and atmosphere.

The study was the result of a workshop supported by WMO, which is a member of the Joint Group of Experts on the Scientific Aspects of Marine Environmental Protection (GESAMP).  GESAMP is a conglomerate of eleven UN organisations and promotes a multidisciplinary, science-based understanding of the marine environment.

“The study makes it clear that a comprehensive grasp of the ocean, and of the effects of human influences on it, can only be achieved by networking researchers and their data. The great challenges of our time are at the global scale. Accordingly, we have to pursue answers to pressing questions with expertise that is as comprehensive and international as possible. That can only be done by working together, » said GESAMP member Prof Sylvia Sander from the GEOMAR Helmholtz Centre for Ocean Research Kiel.

Between 0.013 and 25 million metric tons per year of micro(nano)plastics are potentially being transported within the marine atmosphere and deposited in the oceans.  The high uncertainty in these marine-atmospheric fluxes is related to data limitations and a lack of study intercomparability.

Micro- and nanoplastic penetrate those regions of our planet that are most remote and still largely untouched, affecting the surface climate and the health of local ecosystems. For example, when darker particles are deposited on snow and ice, they affect the ice-albedo feedback, reducing their ability to reflect sunlight and promoting melting. Similarly, darker patches of seawater absorb more solar energy, further warming the ocean.

In the atmosphere, microplastic particles can serve as condensation nuclei for water vapour, producing effects on cloud formation and, in the long term, the climate.