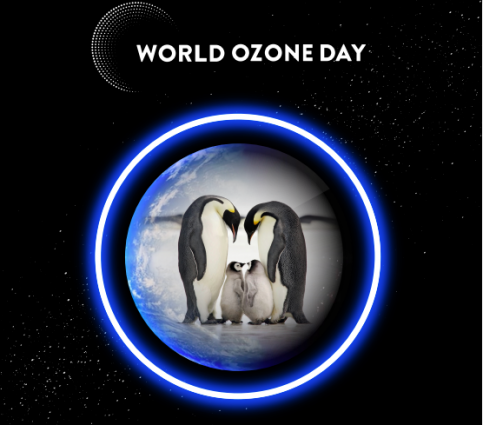 The World Meteorological Organization joins the rest of the international community in marking World Ozone Day on 16 September. It highlights the importance of safeguarding the Earth’s protective ozone layer and shows that collective action, guided by science, is the best way to solve major global challenges.

The ozone layer in the upper atmosphere blocks ultraviolet (UV) radiation that harms living tissue, including humans and plants. The ozone “hole,” which was discovered in 1985 is the result of human emited chlorofluorocarbons (CFCs), which are ozone-depleting chemicals and greenhouse gases used as coolants in refrigerators and in aerosol spray. Nearly 200 countries signed the Montreal Protocol in 1987, which phased out the production and consumption of CFCs.

A new study in Nature demonstrates that by protecting the ozone layer, which blocks harmful UV radiation, the Montreal Protocol also protects plants and their ability to pull carbon from the atmosphere.

“The Montreal Protocol began life as a mechanism to protect and heal the ozone layer. It has done its job well over the past three decades. The ozone layer is on the road to recovery. The cooperation we have seen under the Montreal Protocol is exactly what is needed now to take on climate change, an equally existential threat to our societies,” said UN Secretary-General Antonio Guterres in a message.

The most recent WMO /UN Environment Programme Scientific Assessment of Ozone Depletion, issued in 2018, concluded that the measures under the protocol will lead to the ozone layer on the path of recovery and to potential return of the ozone in the Arctic and Northern Hemisphere mid-latitude ozone before the middle of the century (~2035) followed by the Southern Hemisphere mid-latitude around mid-century, and Antarctic region by 2060 .

Although the use of halons and chlorofluorocarbons  has been discontinued, they will remain in the atmosphere for many decades. Even if there were no new emissions, there is still more than enough chlorine and bromine present in the atmosphere to destroy ozone at certain altitudes over Antarctica from August to December. The formation of the ozone hole is still expected to be an annual spring event. Its size and depth are governed to a large degree by the meteorological conditions particular for the year.

As of the first week of August 2021, the ozone hole reappeared and is rapidly growing and has extended to 23 million square kilometers on 13 September which is above the average since the mid 1980s. The lowest ozone value in the during this seasons was around 140 DU. The hole fluctuates in size annually and it usually reaches its largest area during the coldest months in the southern hemisphere, from late September to early October.

Its evolution is monitored by satellites and ground-based observing stations of WMO’s Global Atmosphere Watch Programme. Those observations are being combined with numerical modelling by different organizations and institutions (NASA, the Copernicus Atmospheric Monitoring Service implemented by ECMWF, ECCC, KNMI and others) to provide near -real time information and analyses on the ozone levels at different parts of the stratosphere, the location and dimensions of the ozone depleted area.

In 2020, there were exceptionally large ozone holes over the Antarctic and Arctic, reflecting extreme meteorological conditions. Specific dynamic conditions in the stratosphere in 2019 led to the smallest Antarctic ozone hole since its discovery.  This shows the need for continued vigilance and observations.

The theme for this year is Montreal Protocol – keeping us, our food and vaccines cool.

Ozone depleting substances (ODS) are also greenhouse gases (GHG) and their abundance in atmosphere over the years has made an important contribution to the radiative forcing of climate.

The distribution and amount of stratospheric ozone depends on temperature and circulation, so that changes in climate will affect the distribution of ozone. Long-lived greenhouse gases warm the troposphere, but cool the stratosphere, leading to changes of the global circulation, affecting the stability of the polar winter vortices, and changing weather patterns.

Therefore, the future evolution of the ozone layer will be influenced by the concentrations of these long-lived greenhouse gases, and by climate change.

The Montreal Protocol has led to very significant avoided warming and the Kigali amendment which regulates the hydrofluorocarbons (HFCs), CFCs and hydrochlorofluorocarbons (HCFCs) replacement gases, adds a further layer of important climate protection. The avoided ultraviolet radiation and climate change also have co-benefits for plants and their capacity to store carbon through photosynthesis.

Some recent scientific findings point that the ozone depletion in the Arctic polar vortex could intensify by the end of the century unless global greenhouse gases are rapidly and systematically reduced. In the future, this could also mean more UV radiation exposure in Europe, North America and Asia when parts of the polar vortex drift south.

Scientists are monitoring the extent to which climate change is leading to stratospheric cooling, which enhances the possibilities for observing temperatures under -78°C especially in the Arctic where there is evidence that the coldest stratospheric winters are becoming colder. Those temperatures are needed for the polar stratospheric cloud formation where the destruction of the ozone takes place.

Several feedbacks to climate change occur from the effects of UV radiation on the biosphere. For example, the breakdown or photodegradation of dead plant material releases carbon to the atmosphere, increasing the amount of carbon dioxide and other greenhouse gases.

Increased thawing or melting of snow, ice and permafrost in the Arctic also releases GHGs and has a negative effect on the exposed ecosystems.

Studies are showing that temperature, UV radiation and frequency of rainfall are key factors that determine the availability or range of suitable habitats for certain plant species to survive. UV-B radiation and factors associated with climate change affect plant growth, pathogen and pest defence, and food crop quality.

For human health, UV radiation can have significant negative effects, for example, in causing skin cancers and certain eye diseases, such as cataract. However, the Montreal Protocol has played a major role in avoiding large numbers of cases and deaths.

With regard to pollution, UV radiation can have a substantial impact on the composition and quality of the atmosphere; on human, terrestrial and aquatic environment health. It drives the breakdown of plastic pollutants with implications for human health and the environment.

The atmospheric measurements and analysis allowed to detect the renewed emissions of some of the controlled substances and led to their timely reduction.  WMO’s Global Atmosphere Watch Network has stations in the Arctic and these are performing high-quality measurements of  ozone, ODS, GHG and UV radiation.

On this day, we pay tribute to National Meteorological Services and other partners for continuing vital atmospheric monitoring and observing activities despite the constraints of the COVID-19 era. The Protocol and relevant conventions require that Parties and other actors work in partnership in an integrated manner, pooling financial resources, knowledge and expertise.