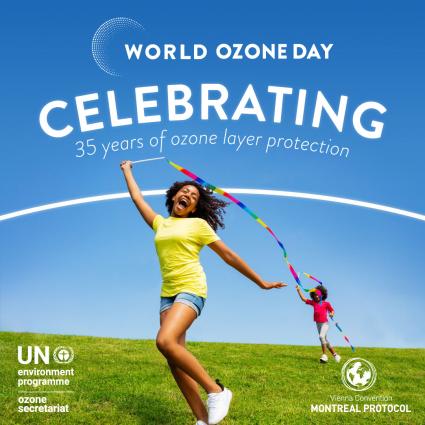 This year, the world marks the 35th anniversary of the world’s most successful environmental agreement which has enabled the gradual recovery of the Earth’s protective ozone layer.

World Ozone Day, held on September 16, celebrates this achievement. It shows that collective action, guided by science, is the only way to solve major global crises. The slogan of the day is ‘Ozone for life’ – the ozone layer is crucial for life on Earth and needs protecting for future generations. 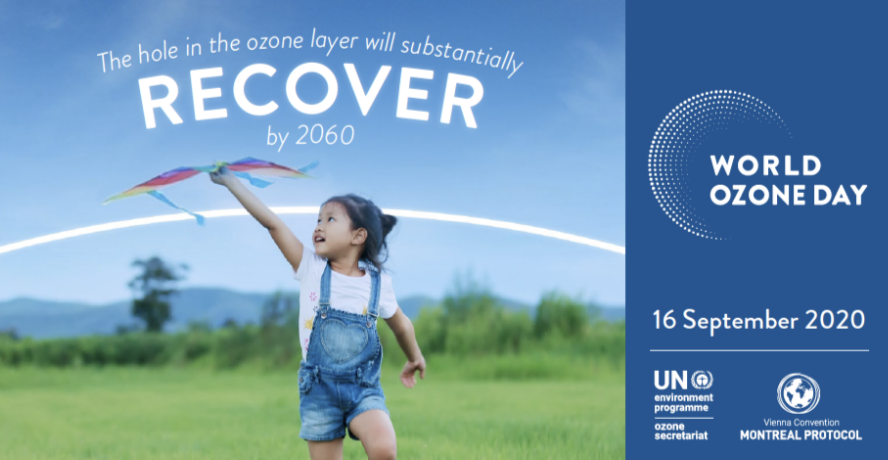 The Vienna Convention for the Protection of the Ozone Layer was adopted in 1985. Under the Convention’s Montreal Protocol, governments, scientists and industry worked together to cut out 99 per cent of all ozone-depleting substances.

“The ozone layer is now healing, safeguarding human and ecosystem health. But the work of the Montreal Protocol is not over. Through the Protocol’s Kigali Amendment, the international community is finding alternatives for coolants that contribute to the growing menace of climate disruption. If fully implemented, the Kigali Amendment can prevent 0.4 degrees Celsius of global warming,” said UN Secretary-General Antonio Guterres.

The latest WMO /UN Environment Programme Scientific Assessment of Ozone Depletion, issued in 2018, concluded that these measures will lead the ozone layer on the path of recovery and to potential return of the ozone values over Antarctica to pre-1980 levels by 2060.

Although the use of halons and chlorofluorocarbons (CFCs) has been discontinued, they will remain in the atmosphere for many decades. Even if there were no new emissions, there is still more than enough chlorine and bromine present in the atmosphere to destroy ozone at certain altitudes over Antarctica from August to December.

The formation of the ozone hole is still expected to be an annual spring event. Its size and depth are governed to a large degree by the meteorological conditions particular for the year. 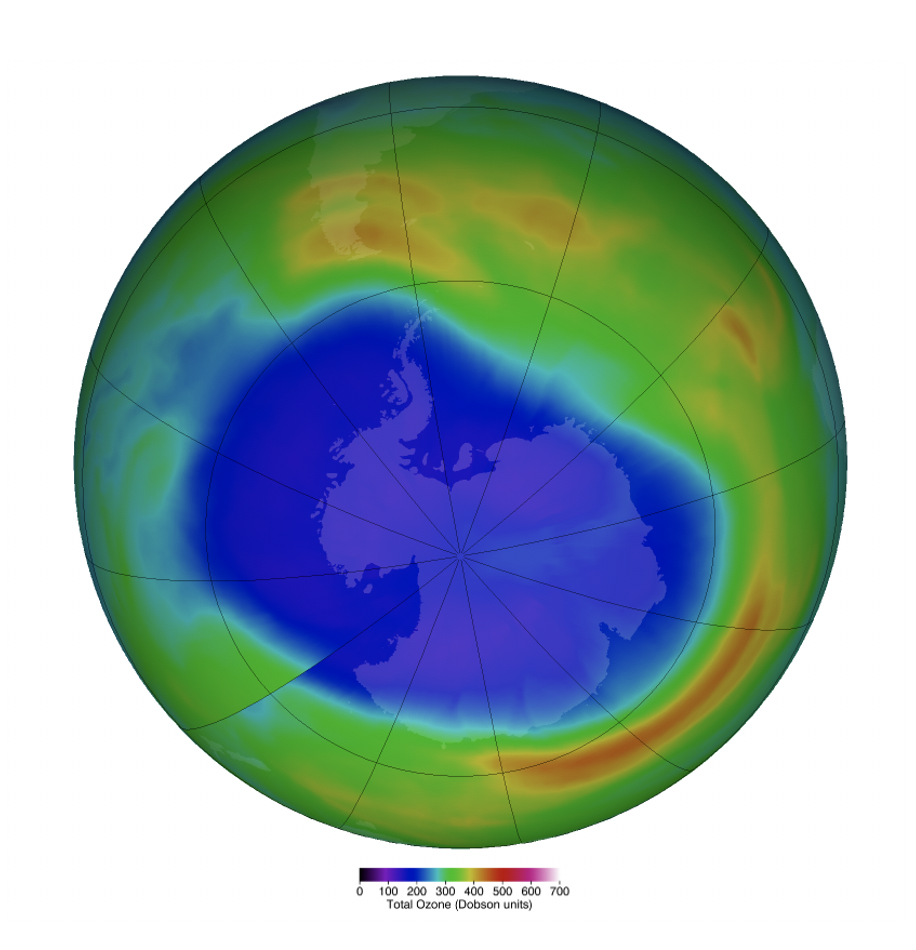 As of the first half of August 2020, the ozone hole reappeared and is rapidly growing. Its evolution is being monitored by means of satellites and a number of ground-based observing stations of the Global Atmosphere Watch Programme. Those observations are being combined with numerical modeling by different organizations and institutions including NASA, the Copernicus Atmospheric Monitoring Service implemented by ECMWF, Environment and Climate Change Canada, and the Netherlands national meteorological institute KNMI to provide near -real time information and analyses on the ozone levels at different parts of the stratosphere, the location and dimensions of the ozone depleted area.

Specific dynamic conditions in the stratosphere in 2019 led to the smallest Antarctic ozone hole since the ozone hole was first discovered.

Image: NASA Ozone Watch product based on satellite observations for 12 September 2020. The false-color view of the monthly-averaged total ozone over the Antarctic pole. The blue and purple colors are where there is the least ozone, and the yellows and reds are where there is more ozone. The area of the ozone hole is determined by locations where  the total ozone concentration falls below 220 Dobson units.

The amount of ozone depleting substances in the atmosphere is also sufficient to cause ozone destruction in the Arctic atmosphere. This is not an annual phenomenon because the Arctic stratosphere is usually less isolated and it does not experience very low temperatures for extended period of time which are required for sustaining the ozone destruction. 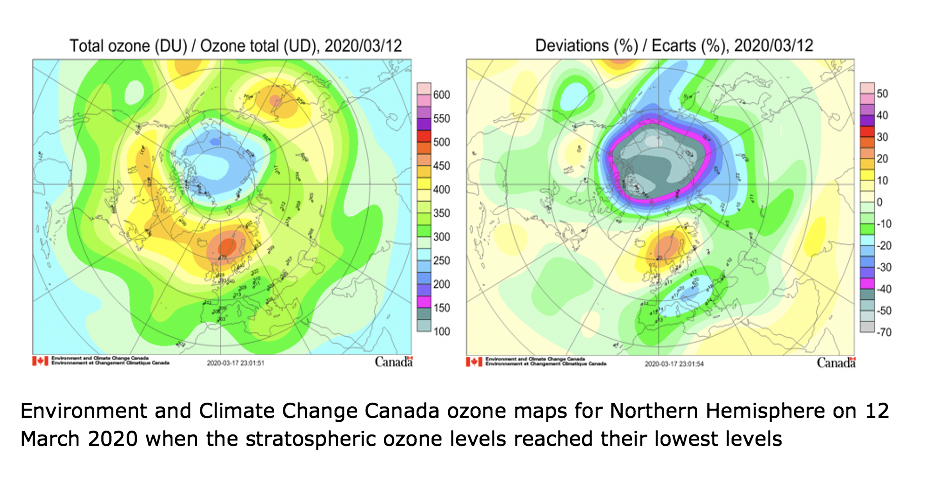 A combination of unusually weak upper atmospheric waves, strong stratospheric polar vortex with consistent very low temperatures for long period of time in the spring of 2020 resulted in an early formation of the record low ozone levels over the Arctic lower stratosphere. The full impact of such strong ozone depletion, which would have been even worse if it had not been for the Montreal Protocol, is still being evaluated.

Impact of COVID-19 on ozone monitoring

The last spring seasons in the Antarctic and Arctic underline the importance of monitoring the nature and the impact of the different drivers on the extent of the ozone destruction.

Meteorological, ozone and UV radiation observations and data delivery have been and continue to be impacted by lockdowns and mandatory teleworking policies introduced in relation to COVID-19. The extent of this impact is depending on their location, measuring techniques, instruments’ automation, requirements for service and calibration, state and requirements of telecommunications. 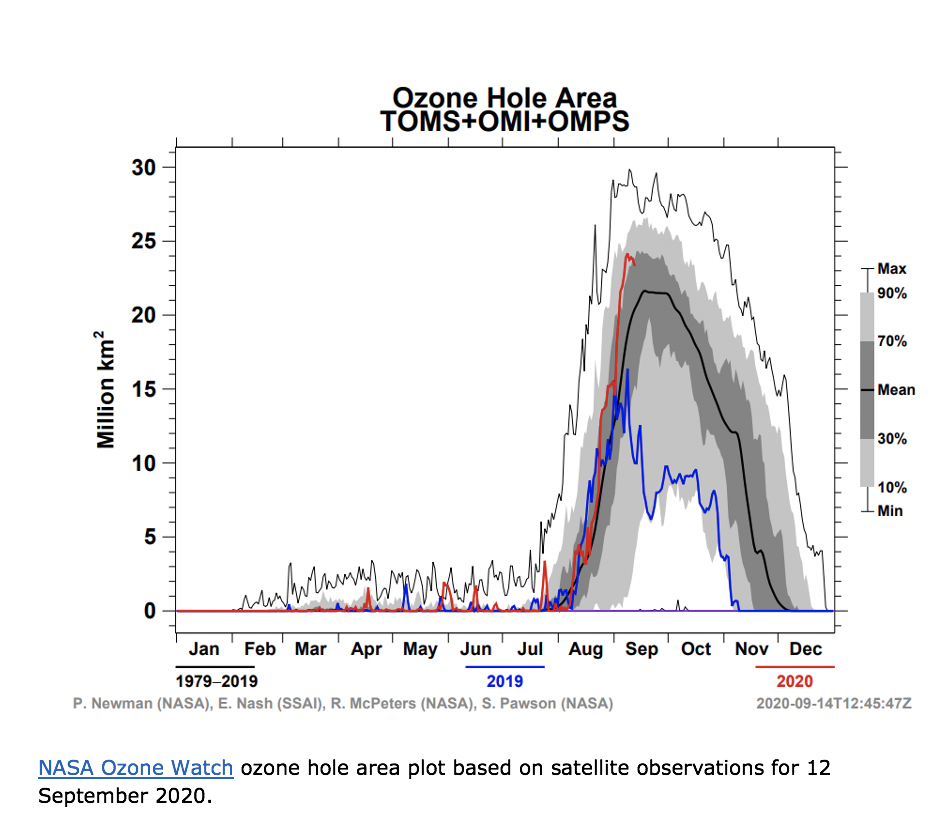 Because large parts of the surface-based weather, ozone and UV observations are either partly or fully automated, those are expect

ed to continue functioning without significant degradation for weeks, in some cases even longer.

Worst affected is the southern hemisphere, especially in Africa and parts of Central and South America where many observations and meteorological stations are manual.

Some ozone observing stations rely on manually taken observations which are subsequently transmitted into the international networks for use in models and forecasts. In some of those stations, ozone and UV observations are supported by the National Meteorological and Hydrological Services which continue to perform their essential 24/7 functions and continuity of the monitoring activities is not at risk.

However, if the pandemic is prolonged, then missing repair, maintenance and supply work will affect those observations. While increasing concern is the frequency and continuity of the observations in the COVID impacted areas which are not automated or not supported by NHMS, the quality of global observations could suffer due to delays or lack of regular and emergency services and calibrations and training activities which are currently suspended.

In celebrating World Ozone Day, WMO recognizes the united efforts of 197 UN Member States that ratified the Montreal Protocol. We also pay tribute to the hard work and dedication of all operators of instrumentation for continuing the atmospheric monitoring and observations of ozone, UV radiation and ozone depleting substance despite the constraints of the COVID-19.