The Earth’s protective ozone layer is well on track to recovery thanks to a highly successful environmental agreement which marks it 30th anniversary on 16 September.

The Montreal Protocol on Substance which Deplete the Ozone Layer achieved a near 99 per cent phase-out of ozone destroying substances like chlorofluorocabons (CFCs) which were once commonly used in products ranging like refrigerants and aerosols.

As a result, the ozone layer which protects life on Earth from harmful levels of ultraviolet rays, is on track to recovery to 1980 benchmark levels by the middle of this century in mid-latitudes and the Arctic, and slightly later in the Antarctic.

Preliminary observations of the annual ozone hole now developing over the Antarctic indicate that it will be in line with what has been observed in recent years.

Ozone-depleting substances are also powerful greenhouse gases and so their elimination has also been beneficial to the climate and has averted more than 135 billion tonnes of carbon dioxide equivalent emissions.

It is expected that this will avert up to 0.5° Celsius warming by the end of the century—while continuing to protect the ozone layer.

“The World Meteorological Organization joins the rest of the international community in celebrating the anniversary of this agreement which has proved to be a great win-win for both the ozone layer and for our climate,” said WMO senior ozone scientist Geir Braathen. 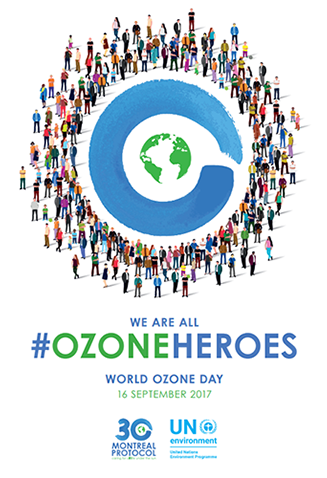 The 30th anniversary falls on the International Day for the Preservation of the Ozone Layer, marked every year on 16 September.

WMO and its Global Atmosphere Watch network supports the UN Environment Programme and its Ozone Secretariat in monitoring the state of the ozone layer. The Ozone Secretariat estimates that up to 2 million cases of skin cancer will have been prevented globally each year by 2030.

WMO and UNEP issue extensive scientific assessments for policymakers every four years. The next report is due in late 2018.

A meeting of ozone research managers earlier this year warned against complacency. The meeting, which grouped leading ozone scientists from around the world, stressed that further research and systematic monitoring into the complex relationship between ozone and climate should remain a priority.

The Montreal Protocol phase-out of CFCs led to a shift towards the use (in air conditioning and refrigeration) of chemicals known as hydrofluorocarbons, or HFCs. They do not harm the ozone layer but are extremely potent greenhouse gases. It was feared that rapid growth in production and use of HFCs would cancel out the climate gains achieved by the regulation of other ozone-depleting substances.

In October 2016, parties to the Montreal Protocol therefore adopted the Kigali Amendment, which will phase down the production and consumption of global-warming HFCs. Countries who ratify the Kigali Amendment commit to cut the production and consumption of HFCs by more than 80 percent over the next 30 years. Most developed countries will start reducing HFCs as early as 2019.

What happens to the ozone layer in the second half of the 21st century will largely depend on future concentrations of CO2, methane and nitrous oxide – the three main long-lived greenhouse gases in the atmosphere. Overall, CO2 and methane tend to increase global ozone levels. By contrast, nitrous oxide, a by-product of food production, is both a powerful greenhouse gas and an ozone depleting gas, and is likely to become more important in future ozone depletion.

As part of the 30th anniversary of the Montreal Protocol, the Ozone Secretariat  has launched an #OzoneHeroes campaign to celebrate the major accomplishments of the Montreal Protocol in protecting the ozone layer and the climate. It aims to increase public recognition of the success and impact of the Protocol, and to generate further support for the Protocol and its new mandate to phase down climate-warming hydrofluorocarbons under the Kigali Amendment, adopted in 2016.