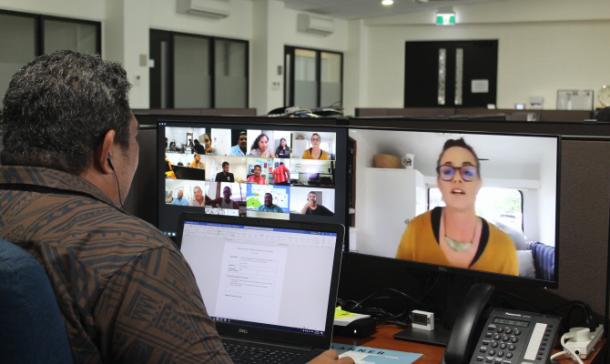 The Sixth Pacific Island Climate Outlook Forum (PICOF) ushered in a new era for the forum, which brings together representatives of Pacific National Meteorological and Hydrological Services (NMHSs), regional partners and global climate centres to ensure consistency in the access to and the interpretation of climate information for the Pacific and the implications for critical sectors.

PICOFs have been held annually in the Pacific since 2015, allowing face-to-face dialogue and learning between the providers and end-users of climate information. They are organised by the Pacific Meteorological Council’s expert panel, the Pacific Islands Climate Services (PICS) Panel with the Secretariat of the Pacific Regional Environment Programme and key partners.

“Traditionally, the PICOF is convened in October of each year to coincide with the beginning of the south-west Pacific tropical cyclone and tropical north Pacific dry season. However, a recent review found that one PICOF a year is not sufficient to provide much needed information on the state of climate including the El Niño-Southern Oscillation (ENSO), which is the major cause of year to year climate variability in the Pacific”, says Vanuatu Meteorological and Geo-Hazard Division Manager Climate Services and PICS Panel Vice Chair, Mr. Allan Rarai.

As a result, it was agreed to convene two PICOFs in 2020 – the first virtual meeting of which was held on Tuesday 21 April and coincides with the beginning of the south-west Pacific dry season. The second PICOF will be held in October.

Not only was this the first PICOF to be held in April, it was also the first type of meeting to be held virtually, due to travel restrictions brought about by the COVID-19 pandemic. More than 40 participants joined the virtual meeting from around the Pacific.

Dr. Olivia Warrick, Co-Chair of the PICS Panel, said “It is important to emphasise that this first virtual PICOF should be viewed as a pilot, and the PICS Panel will evaluate lessons learned afterward. COVID-19 may well mean that a face-to-face PICOF in October this year is not possible, in which case this is an important trial run.”

The virtual PICOF discussed the climate of November 2019 – April 2020, the 2020 north tropical Pacific cyclone season, as well as the Climate Outlook for the Pacific islands for May – October 2020. It also compared the various seasonal climate forecast guidance for the Pacific region.

The forum also recognised the upcoming challenges posed by the dry season for many Pacific island countries, as the demand for water increases due to the COVID-19 pandemic.

“As people isolate at home, travel between islands is restricted, and handwashing and hygiene measures are increased, a sustainable water supply is fundamental,” said Dr. Warrick.

“Some locations have recently experienced significantly drier than normal conditions. The drier conditions will be exacerbated for countries recently impacted by Tropical Cyclone Harold. Outlooks for the dry season are therefore a very important ‘heads up’ that can help to inform where resources are concentrated to support COVID-19 preparation measures.”

An April PICOF statement, summarising climate and ocean conditions over the past months and providing a seasonal outlook to September 2020, will be produced as an output of the virtual meeting.

PICOF embraces the model of the Global Framework for Climate Services User Interface Platform (UIP) which provides a structured means for users, researchers and climate services providers to interact at the global, regional and national level to ensure that user needs for climate services are met.