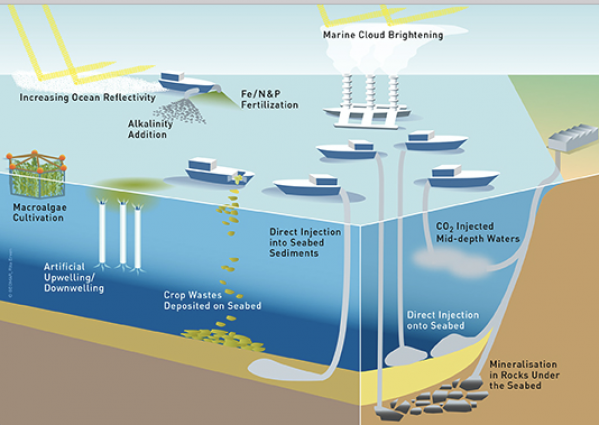 Recent developments in the climate change arena, including the Paris Agreement in 2015 and the publication of the IPCC Special Report on Global Warming of 1.5 °C, have noted the potential need for negative emission technologies to remove carbon dioxide from the atmosphere in order to limit temperature increase.

Adding iron or other nutrients into the oceans to enhance natural processes to draw carbon from the atmosphere and creating foams which float on the surface of the sea to reflect sunlight back into the atmosphere are among a wide range of geoengineering practices which have been put forward as potential tools for countering climate change.

But, in a new report, marine and social scientists are urging a precautionary approach towards these techniques which involve deliberate large-scale manipulation of the environment.

WMO is one of the co-sponsors of the Working Group which drafted the high-level review.

“It is essential that the process of evidence-based assessment takes place in parallel with ongoing efforts to devise research governance structures, since both are inextricably linked in the marine geoengineering debate and the development of policy,” the report says.

The High level review of a wide range of proposed marine geoengineering techniques is the first assessment to comprehensively examine the many proposed ways to remove carbon dioxide from the atmosphere or boost the reflection of incoming solar radiation to space (known as “albedo modification”) - or, in some cases, both.