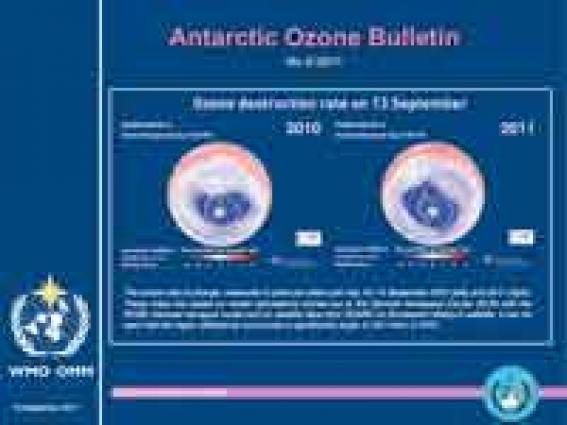 This year’s International Day for the Preservation of the Ozone Layer is meant to serve as a rallying call to accelerate the phase-out of chemicals which destroy the Earth’s fragile shield and which are also powerful greenhouse gases.

“HCFC phase-out: a unique opportunity” is the theme for the celebration, marking the anniversary of the signature of an agreement known as the Montreal Protocol. Many ozone-destroying chemicals such as chlorofluorocarbons (CFCs), once present in products such as refrigerators and spray cans, have been phased out under the Montreal Protocol. However, demand for replacement substances including hydrochlorofluorcarbons (HCFCs) has increased, prompting an agreement in 2007 to accelerate the phase-out of HCFCs, which are commonly used in air conditioning

In its Antarctic Ozone Bulletin published today (16 September), WMO reported that the ozone hole increased rapidly during the first two weeks of September from less than 10 million km2 to approximately 24 million km2. This means that the 2011 ozone hole is about average in size in comparison to the ozone holes of the last decade. It is already significantly larger than in 2010, but smaller than in 2006, when there was a record large ozone hole.