As the global community comes together to celebrate World Environment Day, important new data shows that the causes and indicators of climate change have reached new heights. May 2020 was the warmest May on record, according to one internationally recognized dataset. Carbon dioxide levels at a benchmark observing station also set a new record.

This will have a major impact on biodiversity and ecosystems - the theme of World Environment Day – as well as socio-economic development and human well-being. World Environment Day activities are therefore stressing that it is Time for Nature. It is time to grow back greener and to build back better for people and planet.

“Governments are going to invest in recovery, and there’s an opportunity to tackle the climate as part of the recovery programme. There is an opportunity to start bending the curve in the coming five years,” said WMO Secretary-General Petteri Taalas.

Mr Taalas has repeatedly stressed that the industrial and economic slowdown from COVID-19 is not a substitute for sustained and coordinated climate action to reduce greenhouse gas emissions.  Due to the very long lifetime of CO2 in the atmosphere, the impact of a drop in emissions  is not expected to lead to a reduction of CO2 concentrations in the atmosphere.

“Nature is sending us a clear message,” said UN Secretary-General António Guterres. “We are harming the natural world – to our own detriment. Habitat degradation and biodiversity loss are accelerating,” he said.

“Climate disruption is getting worse. Fires, floods, droughts and superstorms are more frequent and damaging. Oceans are heating and acidifying, destroying coral ecosystems. And now, a new coronavirus is raging, undermining health and livelihoods. To care for humanity, we MUST care for nature,” he said.

Warmest May on record

May 2020 was the warmest May on record, according to the Copernicus Climate Change Service (C3S), implemented by the European Centre for Medium-Range Weather Forecasts on behalf of the European Commission.  It was 0.63°C warmer than the average May from 1981-2010.

The most above-average temperatures were recorded over parts of Siberia - where they were up to 10°C above average. They were also much above average over western Alaska, along the Andes bordering Chile and Argentina, and over regions in West and East Antarctica. It was also much warmer than average over western North America, the far north and south of South America, north-western, central and south-western Africa, and south-eastern Asia.

Regions of below-average temperature include most of central and eastern Canada, the eastern USA, southern Brazil, parts of southern Asia, and Australia, according to the C3S data.

Boreal spring was marked by highly anomalous temperatures over Siberia, which reached close to 10°C above the 1981-2010 average over the lower reaches of the Ob and Yenisei rivers in the north-west of the region, according to the report.Here record-early break-up of river ice has been reported.

All the reported findings are based on computer-generated analyses using billions of measurements from satellites, ships, aircraft and weather stations around the world.

The Copernicus data records are used by WMO, along with datasets from NOAA, NASA, the UK’s Met Office and the Japan Meteorological Agency, to compile global temperature statistics.

Carbon dioxide concentrations measured at Mauna Loa observing station in Hawaii reached a seasonal peak of 417.1 parts per million for 2020 in May, the highest monthly reading ever recorded, according to scientists from NOAA and Scripps Institution of Oceanography at the University of California San Diego.

Mauna Loa is the longest established observing station and is regarded as a benchmark in WMO’s Global Atmosphere Watch programme, which consists of observing stations in more than 50 countries, is monitoring global trends.

Concentrations of CO2 are subject to seasonal and regional fluctuations. The seasonal maximum usually occurs early in the Northern hemisphere spring before vegetation growth absorbs CO2 from the atmsophere. CO2 levels are lower for the rest of the year. The annual global average will therefore not be as high as the monthly Mauna Loa figure. 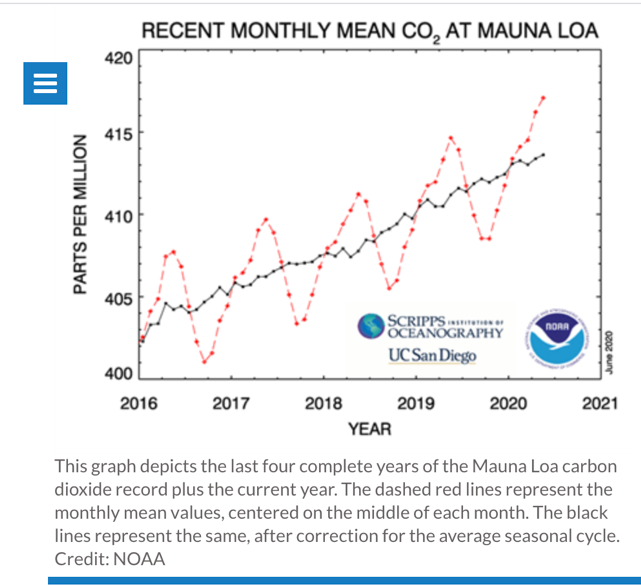 This year’s peak value was 2.4 parts per million (ppm) higher than the 2019 peak of 414.7 ppm  recorded in May 2019. Monthly CO2 values at Mauna Loa first breached the 400 ppm threshold in 2014, and are now at levels not experienced by the atmosphere in several million years.

“Progress in emissions reductions is not visible in the CO2 record,” said Pieter Tans, senior scientist with NOAA’s Global Monitoring Laboratory. “We continue to commit our planet - for centuries or longer - to more global heating, sea level rise, and extreme weather events every year.” If humans were to suddenly stop emitting CO2, it would take thousands of years for our CO2 emissions so far to be absorbed into the deep ocean and atmospheric CO2 to return to pre-industrial levels.

“People may be surprised to hear that the response to the coronavirus outbreak hasn’t done more to influence CO2 levels,” said geochemist Ralph Keeling, who runs the Scripps Oceanography program at Mauna Loa. “But the buildup of CO2 is a bit like trash in a landfill. As we keep emitting, it keeps piling up. The crisis has slowed emissions, but not enough to show up perceptibly at Mauna Loa. What will matter much more is the trajectory we take coming out of this situation.”

World Environment Day sees the launch of “Race to Zero” that will run up to COP26 -- an international campaign for a healthy, resilient zero carbon recovery. Led by the UNFCCC Champions for Climate Action, it brings together an unprecedented coalition of net zero emissions initiatives, covering 992 businesses, 449 cities, 21 regions, 505 universities and 38 of the biggest investors.

These ‘real economy’ actors join 120 countries in the Climate Ambition Alliance, creating the largest ever alliance committed to achieving net zero carbon emissions by 2050 at the latest.

Collectively, these real economy actors now cover just over half GDP, a quarter of global CO2 emissions and over 2.6 billion people, according to new data by the Energy and Climate Intelligence Unit published today, representing a 66% increase in commitments since COP25.