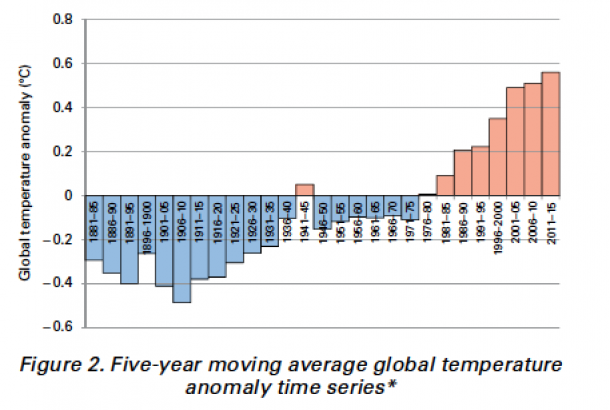 Global mean temperatures near the Earth’s surface continued to set new records between 2011 and 2015, consistent with rising levels of greenhouse gases in the atmosphere, according to preliminary findings of the assessment of the state of the climate in the current 5 years period.

The year 2014 was nominally the warmest on record, with global mean temperatures 0.61 °C above the 1961-1990 reference period average. The year 2015 is continuing on a similar track, with temperatures for the period January to July at 0.70 °C above the long-term average. The climate for the rest of 2015 will be influenced by the El Niño event, which is likely to be one of the four strongest since 1950.

The four-page WMO summary provides a snapshot about temperatures, extreme events, the Polar regions and sea levels.  It will be made available to delegates seeking more information about climate trends at the U.N. General Assembly and the U.N. Sustainable Development Summit (25-27 September).

WMO will issue a more detailed report about the 2011-2015 climate ahead of the climate change negotiations in Paris in December, as well as WMO’s provisional statement on the status of the climate in 2015.

The WMO global temperature analyses are principally based on three complementary datasets maintained by the Hadley Centre of the UK’s Met Office and the Climatic Research Unit, University of East Anglia, United Kingdom (combined); the U.S. National Oceanic and Atmospheric Administration (NOAA) National Climatic Data Centre; and the Goddard Institute of Space Studies (GISS) operated by the National Aeronautics and Space Administration (NASA).

On September 17, NOAA reported that the month of August was the warmest August on record. The global average temperature across global land and ocean surfaces was 0.74°C above the average for the 1961-1990 reference period, and  0.88°C above the 20th century average. This was the sixth month in 2015 that has broken its monthly temperature record (February, March, May, June, July, and August).

The average January-August temperature across global land and ocean surfaces was 0.72°C above the 1961-1990 average, and 0.84°C  above the 20th century average. This was the highest for January-August in the 1880-2015 record, according to NOAA.