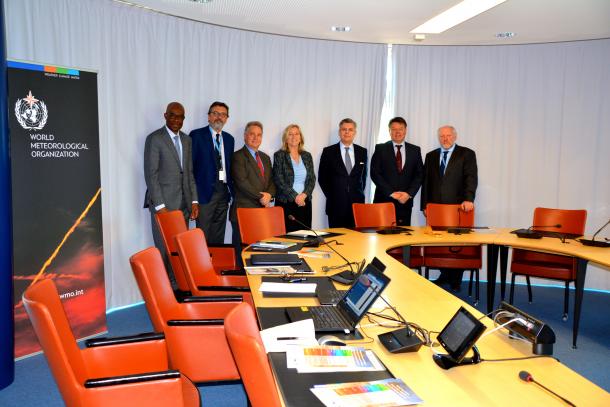 Recognizing that Africa is particularly vulnerable to the impacts of climate change, the World Meteorological Organization has launched the Training Programme on Climate Change Adaptation and Disaster Risk Reduction in Agriculture to improve the capacity of national technical services in West African countries.

Recognizing that Africa is particularly vulnerable to the impacts of climate change, the World Meteorological Organization has launched the Training Programme on Climate Change Adaptation and Disaster Risk Reduction in Agriculture to improve the capacity of national technical services in West African countries. The programme seeks to reduce the impacts of natural disasters and climate change on the agricultural sector and to support sustainable development.

“Climate change is threatening food security in many parts of the world,” said WMO Secretary-General Petteri Taalas. “This new training program will make a significant contribution to strengthening the capacity of the technical services of West African countries to address the impacts and risks of climate change on agriculture through early warning systems and climate prediction.”

The training program is funded by the Italian government, represented at the inuagural ceremony at WMO by his Exellency Ambassador Maurizio Serra, Permanent Representative of Italy to the UN. The partners for the project are two WMO Regional Training Centers: the Institute of Biometeorology of the Italian National Research Council (CNR - IBIMET), represented by the Director Dr Antonio Raschi and, the AGRHYMET Regional Center, represented by Dr Moussa Waongo.

The project will be implemented in the 17 member states of CILSS/ECOWAS (Benin, Burkina Faso, Cabo Verde, Cote d'Ivoire, The Gambia, Ghana, Guinea, Guinea-Bissau, Liberia, Mali, Niger, Nigeria, Senegal, Sierra Leone,  Togo, Mauritania and Chad. With a budget of some €820 000, the  project will focus on training experts from national agriculture, agro-meteorological, hydrological and early warning services.

The project will organize training courses for technicians and experts of national services in order to develop effective climate services for climate change adaptation and disaster risk reduction. The main objective of the training is to support the capacities of West Africa governments through the national technical services to supoort government actions in sustainable development and food security, in response to climate change, natural disasters and their associated risks.

The project will also consolidate a network among scientific and technical institutions in order to work on shared methodologies and to create an objective and harmonized base of information. The aim is to transfer and share the know-how, to expand cooperation in sensitive areas to the national and regional level and to promote exchanges and collaboration.

Africa is one of the most vulnerable regions to climate change impacts in the world because of its widespread poverty and its limited adaptation ability. Since the 1990s, the issue of natural disasters has gained international visibility. In addition, because much of West Africa’s growing population relies on rain-fed agriculture, the region is vulnerable to crises that can turn into humanitarian disasters, such as the one that hit East Africa in 2011 when a long period of extreme drought threatened the survival of millions of people.