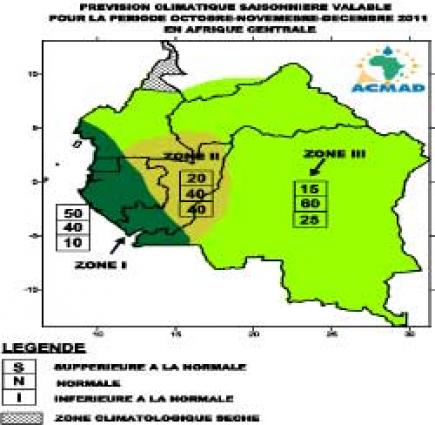 The Regional Climate Outlook Forum for Central Africa has issued its outlook for the October-December seasonal rains, which are influenced by sea surface temperatures in the tropical Atlantic, Indian and Pacific Oceans.

The regional climate outlook, based on expert consensus, indicates that the coastal zones of Central Africa, from Cameroon to the Democratic Republic of Congo and including the islands of Bioko and São Tomé et Principe are likely to receive above-normal rainfall. Normal rainfall is anticipated for the majority of the continental zone from southern Chad to the southern Democratic Republic of Congo.

The Forum, held in Douala, Cameroon, from 19 to 21 September 2011, was convened by the African Centre of Meteorological Applications for Development (ACMAD), with the support of the UN Economic Commission for Africa and the World Meteorological Organization, and was attended by experts from the National Meteorological and Hydrological Services of countries in Central Africa as well as regional and global experts.