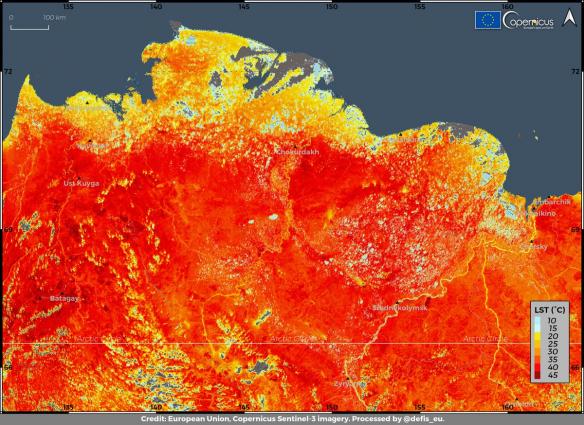 The World Meteorological Organization is seeking to verify a new record temperature north of the Arctic Circle of 38° Celsius. This was on 20 June in the Russian town of Verkhoyansk amid a prolonged Siberian heatwave and increase in wildfire activity.

The Russian Federal Service for Hydrometeorological and Environmental Monitoring (Roshydromet) confirmed the reading at the station, which has provided daily measurements since 1885. The Verkhoyansk meteorological station had a previous air temperature record of 37.3° C observed on July 25, 1988, according to scientists German Alekseenkov and Vasily Smolyanitsky at Roshydromet's Arctic and Antarctic Research Institute.

Verkhoyansk, located in the northern part of Republic of Sakha (Yakutia), is in a region of Eastern Siberia which has an extreme very harsh dry continental climate (very cold winter and hot summer).

Once WMO receives confirmation of the temperature from Roshydromet, it will then refer the finding for verification by a team of investigators for its Global Weather and Climate Extremes Archive.  This provides details of  global, hemispheric, and continental extremes (heat, precipitation etc).

Until now WMO has not verified potential records for "highest temperature recorded north of Arctic Circle".  However, the interest in this extreme observation has garnered enough interest that we are currently studying the creation of such a new category for the official Archive, according to Randall Cerveny, WMO’s Special Rapporteur on Weather and Climate Extremes. 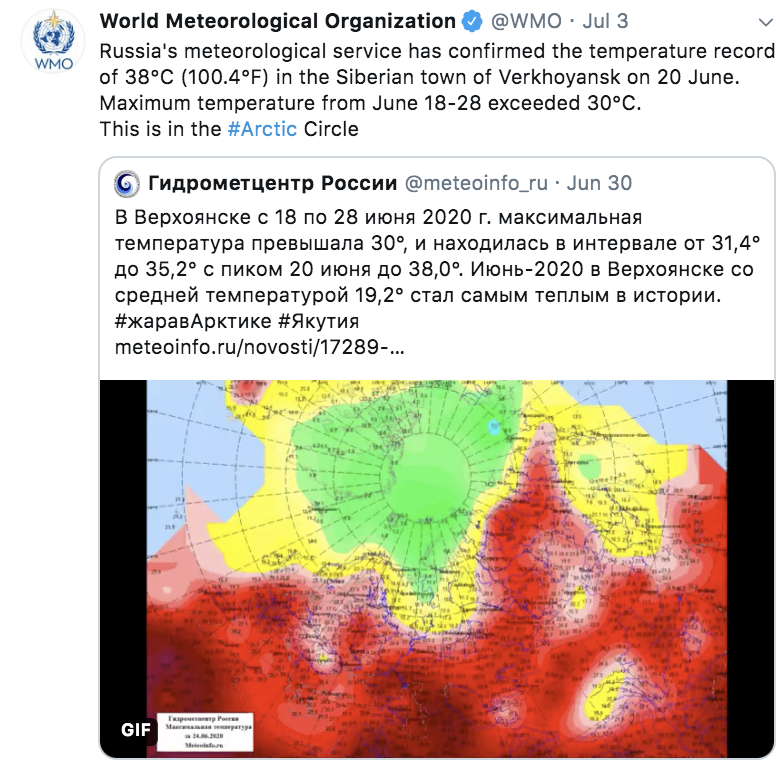 “A WMO fast-response evaluation team has given tentative acceptance of this observation as a legitimate observation, which is consistent with current upper air observations at the time in Siberia,” said Professor Cerveny,. "This will now be subject to a normal process for a detailed formal review by a panel of WMO atmospheric scientists."

“It has been an unusually hot spring in Siberia, and the coinciding lack of underlying snow in the region combined with overall global temperature increases, undoubtedly helped play a critical role in causing this extreme temperature observation,” said Prof Cerveny, President’s Professor of Geographical Sciences, Arizona State University.

As part of the verification process, WMO is contacting the Russian meteorological agency to collect direct information on the observation (such as the actual data, the type of equipment used, the quality-checks and calibration of the instrument, the observation monitoring techniques, the correspondence to surrounding stations, etc.

“Those data will then be very carefully examined by an international panel of atmospheric scientists. Fundamentally, these evaluations are very thoroughand time-consuming projects.  But the end result will be incredibly valuable information that will help climate scientists better understand climate, engineers and medical doctors better prepare for climate extremes and even the general public in achieving a better appreciation of climate change across this planet,” said Prof Cerveny.

The Arctic is among the fastest warming regions in the world and is heating at twice the global average. Annual surface air temperatures over the last 4 years (2016–2019) in the Arctic (60°–85°N) have been the highest on record. The volume of Arctic sea-ice in the month of September 2019 (after the melting season) has declined by more than 50% compared to the mean value for 1979–2019.

Siberia has witnessed exceptional heat, with temperatures up to 10°C (18.5 °F) above average in May and driving the warmest May on record for the entire Northern hemisphere and indeed the globe.

But it wasn’t just May that was unusually mild in this region; the whole of winter and spring had repeated periods of higher-than-average surface air temperatures, particularly from January onwards.

The unusual warmth in winter and spring was associated with an exceptionally early break-up of ice in Siberia’s rivers. 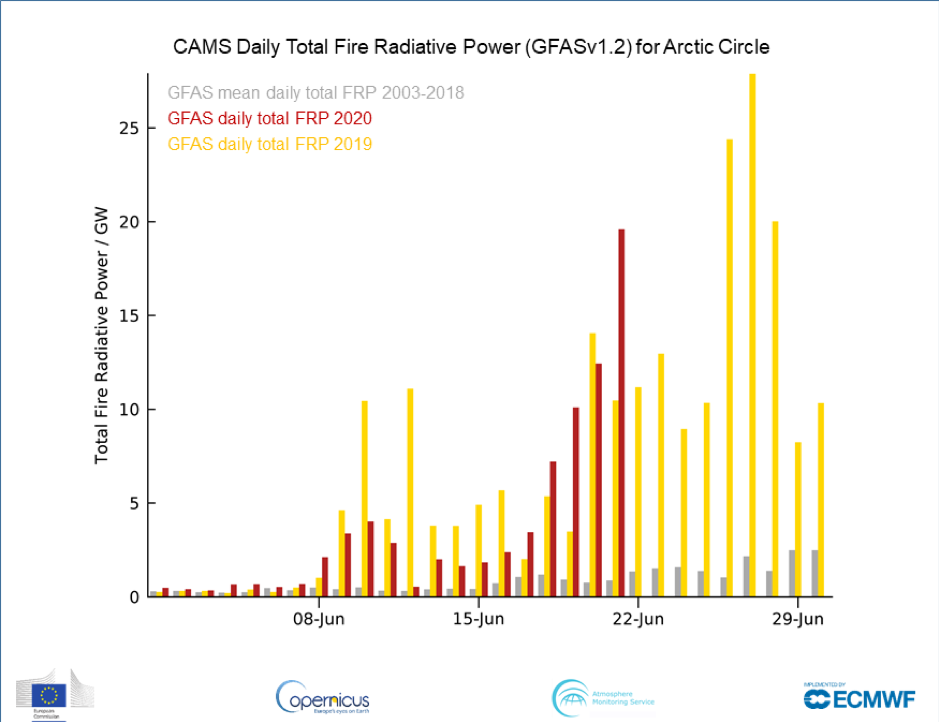 “Although the planet as a whole is warming, this isn’t happening evenly. For example, western Siberia stands out as a region that is warming faster than average and where variations in temperature from month to month and year to year tend to be large. This means that, to some extent, large temperature anomalies are not unexpected. However, what is unusual in this case is how long the warmer-than-average anomalies have persisted,” said Copernicus.

Copernicus Atmospheric Monitoring Service said the number and intensity of wildfires in Northeastern Siberia and the Arctic circle has continued to increase over the last few days. The daily total intensity is at similar levels to that observed in 2019.

In the discussion on regional impacts for both Western and Eastern Siberia, the Forum warned of a possible risk of forest fires at the beginning of summer due to above normal temperature and below normal precipitation. Forecasted high temperatures may lead to continued permafrost degradation and coastal erosion. The reduction in the sea-ice extent and permafrost degradation in tundra may create difficulties for “keystone” species, e.g. polar bears, caribou, whales etc, The thawing of permafrost has implications also for the stability of structures constructed there as well as the potential release of methane, a powerful greenhouse gas.