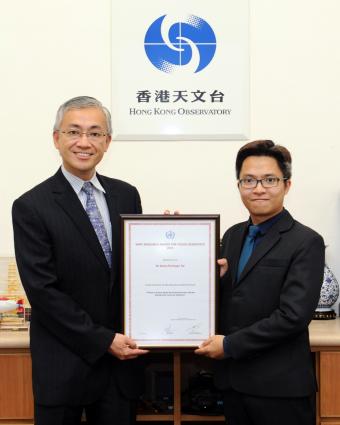 Mr. Shun Chi-ming, Director of the Hong Kong Observatory presented the World Meteorological Organization (WMO) Research Award for Young Scientists 2015 on behalf of WMO to Professor Tai Pui-Kuen of the Earth System Science Programme of The Chinese University of Hong Kong (CUHK) on 1 September.  Professor Tai is the first Hong Kong scientist receiving the Award and his award-winning research is titled “Threat to future global food security from climate change and ozone air pollution” that he published in the Journal of “Nature Climate Change”.

In the study for which Prof. Tai is receiving the award, Prof. Tai found that warming alone will reduce global agricultural production by more than 10% by year 2050, but the combined effect of global warming and air pollution can be even more detrimental to crop yields.  In the worst-case scenario, the undernourished population in developing countries can climb up by about 50% by 2050.  Nonetheless, strict controls on air pollution can partially offset the adverse impacts of climate change, leading to a smaller combined global crop production decrease.  According to the Food and Agriculture Organization of the United Nation, the worldwide demand for food is expected to double by 2050, but human being’s ability to produce enough food is severely challenged by climate change.  Prof. Tai’s findings show that the interactive effect of global warming and air pollution can in particular significantly threaten global food production, suggesting that policy makers should take both factors into account in addressing the imminent global food crisis.

In presenting the Award to Prof. Tai on behalf of WMO, Mr. Shun said: “Professor Tai’s receiving the “WMO Research Award for Young Scientists” is an honour for the meteorological community in Hong Kong.  Professor Tai’s study on global food security is a timely reminder to us that the impacts of climate change are highly relevant to our daily life.  Under the influence of global warming, high temperature records in Hong Kong has been broken rather frequently in recent years.  Actions to reduce greenhouse gas emission and to make our society more resilient to climate change effects must be taken without delay.  The Observatory will spare no efforts to undertake researches on climate change and support local institutions on related projects.  My gratitude to Professor Tai and other fellow scientists for their research results which translate into science-based climate information and services for all decision makers and stakeholders to carry out the mitigation and adaptation measures.  Food security, water resources, disaster risk reduction, health and energy are the priorities of WMO in providing these climate services.”

Prof. Tai remarked, “I am honored to be a recipient of the WMO Research Award for Young Scientists this year.  I wish to thank members of my research team and my collaborating partners for their great work and support over the years.  I would also like to express my sincere thanks to the Hong Kong Observatory, through which the nomination to WMO was successfully made.  We will strive to continue our studies on the consequences of global environmental change, such that policy makers can be better informed to formulate optimal strategies for a sustainable future.”

Since 1970, the WMO has been granting the “WMO Research Award for Young Scientists” to young scientists as a means of encouragement for their outstanding research work in all fields of meteorology and hydrology.  In the past 45 years, 42 awards have been granted with the winners coming from 30 different countries.