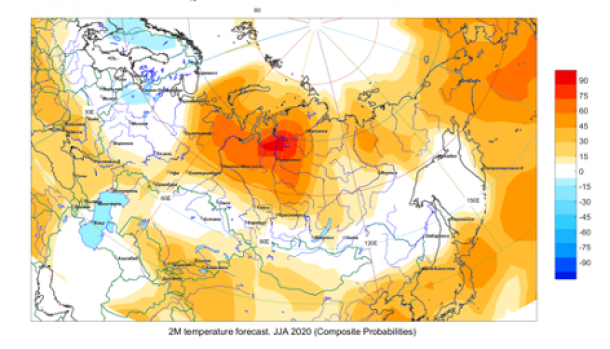 The North-Eurasian Climate Outlook Forum has issued a consensus forecast of surface air temperature and precipitation for the upcoming summer season 2020. It also reviewed conditions during the winter, which saw strong atmospheric blocking patterns and big differences and temperature and precipitation, with the Russian Federation witnessing its warmest winter on record.

An intensive and deep circumpolar vortex in the stratosphere with the centre over the Franz Josef Land was observed during December, January and February. It ended only in March 2020 with a sudden stratospheric warming event occurred in March 2020. Such conditions led to the formation of polar stratospheric clouds and, judging by preliminary estimates, to a record-breaking depletion of the ozone layer in the Arctic since 2011. 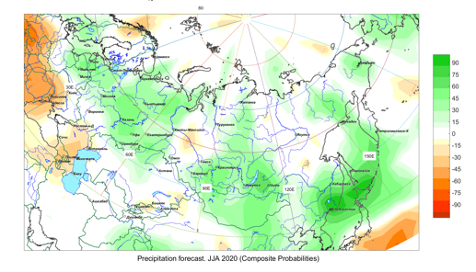 For the upcoming Northern Hemisphere summer the air temperature is expected to be above normal over Siberia, in particular, and the Far East excluding the southern regions, where the forecast uncertainty is high. Positive temperature anomalies are predicted with a probability of about 40% in Uzbekistan, Turkmenistan, Kyrgyzstan and Tajikistan, and in the southern, western and eastern regions of Kazakhstan. The air temperature forecast signal over the largest European part is weak.

The meeting also looked at the accuracy of the consensus forecast for the December-February winter season. Over the territory of northern Eurasia it was 71% for air temperature and 68% for precipitation. The forecast accuracies for the Asian territory were higher than for the European part.

NEACOF-18 online session was hosted by the Hydrometcentre of Russia, It brought together experts from National Meteorological and Hydrological Services of CIS countries to develop actionable climate information for decision-makers.