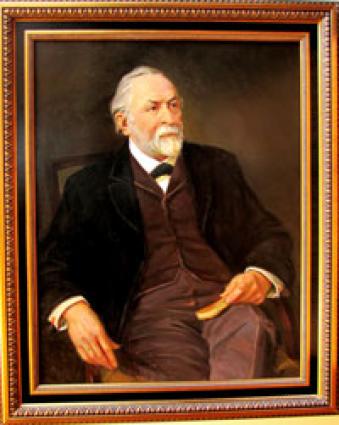 The Russian Federation has presented Switzerland with a portrait of Heinrich von Wild, an eminent Swiss physicist and meteorologist who founded the Russian meteorological service. In 1868 he accepted the invitation of the Academy of Sciences in Saint Petersburg and left to take up the post of director of the General Physical Observatory. Heinrich von Wild made an invaluable contribution to the development of meteorology and to the establishment of a meteorological observing system in Russia. He was President of the International Meteorological Organization from 1879 to 1896. The gift also includes an anemometer invented by von Wild. A ceremony to mark the occasion was held on 18 June at the Museum of the History of Science in Geneva. Mr Alexander Bedritskiy, President of the World Meteorological Organization, and Mr Patrice Mugny, Minister of Culture of the City of Geneva, paid tribute to this eminent Swiss scientist in the presence of a large number of government representatives.