Scientific conference looks at the ocean in a warmer world 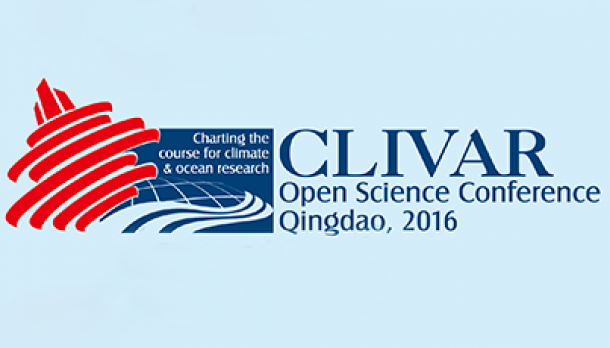 Scientific conference looks at the ocean in a warmer world

New research into the complex interactions between the ocean and the global climate – as evidenced by the recent super El Niño - will be examined at an international scientific gathering in China. The conference will also focus on how the ocean is bearing the brunt of global warming, with huge consequences for the future of the planet.

The Open Science Conference takes place in Qingdao, China, from 18 – 25 September and will bring together more than 600 scientists. It is organized by the World Climate Research Programme’s (WCRP) Core Project on Climate and Ocean – CLIVAR.

“The ocean sustains life on Earth and is also protecting us from the worst impacts of global warming by not only storing more than 90 per cent of the extra heat from greenhouse gases but also by taking up about a third of the total man-made emissions of carbon dioxide,” said Nicolas Gruber, a professor of environmental sciences at the University of Zurich, and one of the conference speakers.

“Record temperatures are being experienced at the surface and are penetrating to deeper ocean levels than ever experienced before. Acidity from the carbon dioxide taken up from the air is affecting the marine chain of life. If we are to act on climate change, we need to better understand how much more the ocean as part of the climate system can absorb before it reaches a tipping point,” said Annalisa Bracco and Detlef Stammer, co-chairs of CLIVAR.

“How does a warmer ocean affect El Niños and tropical cyclones? How do changing ocean temperatures impact on monsoon patterns and rainfall. How quickly will sea-levels rise and how will Artic sea ice loss affect the atmosphere and ocean circulations in the northern hemisphere and eventually modify tropical - extratropical interactions? These are just some of the many urgent questions, and the answers will affect all of us for many generations to come,” said Detlef Stammer, who is also one the co-chairs of the conference.

Specific scientific issues to be addressed will include the effects of a warming ocean on future climate change, regional variation in ocean and climate warming, the respective contributions of thermal expansion and melting ice to sea-level rise, the connections between the oceans and the global water and energy cycle, and the impact of excess carbon on sea life, and climate information and sustainable development.

Thomas Stocker, the former co-chair for physical science with the Intergovernmental Panel on Climate Change, will give the opening keynote speech Anthropogenic Climate Change: Time to Focus on the Ocean.

Another keynote will be from Wenju Cai (CSIRO, Australia): El Niño Southern Oscillation and greenhouse warming.

Other well-known scientists addressing the conference will include Guy Brasseur of the Max Planck Institute for Meteorology; Lixin Wu, Director of the newly created Qingdao National Laboratory for Marine Science and Technology and hosts for the Conference; Kevin Trenberth, NCAR, USA, and Arame Tall, FAO, Dakar.