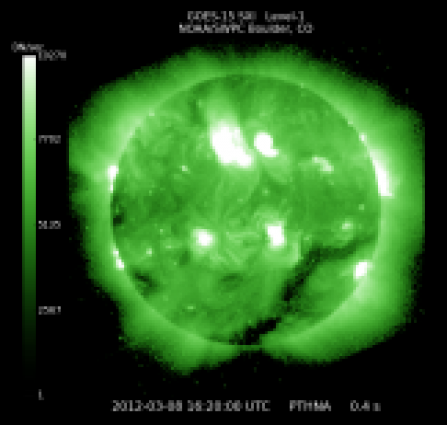 Scientists are monitoring the impacts of a recent solar storm. Such events are likely to become more frequent and more severe in the approach to the next peak in solar activity around 2013. As a result, the World Meteorological Organization is stepping up international coordination on space weather hazards.

The U.S. National Weather Service Space Weather Prediction Center has indicated that a coronal mass ejection (CME) reached the Earth at 1045 GMT. The corona is the region around the sun (visible during a solar eclipse) where temperatures can reach more than a million degrees and X-ray radiation is emitted. Coronal mass ejections, often originating from active areas on the sun’s surface (like groupings of sunspots), release huge quantities of radiation and matter into space.

Based on the overall field strength observed so far, the predictions for periods reaching the G3 (Strong) geomagnetic storm level look justified, according to the NWS Space Weather Prediction Center. So far, the orientation of the magnetic field has been opposite of what is needed to cause the strongest geomagnetic impacts but as the event progresses, this may change. The main impacts from this event are likely to be on high-frequency communication in the polar regions, rendering high-frequency (used in aviation) unusable at the highest latitudes. There are also several confirmed reports of commercial airlines avoiding the polar routes because of the disruption to high frequency communication.

After a relatively quiet sun, solar activity is expected to peak around 2013 and this will have an impact on the environment between the sun and the earth. Solar minimum occurs in years when the number of sunspots is lowest; solar maximum occurs in the years when sunspots are most numerous, sometimes numbering several hundred on a given day. During solar maximum, activity on the Sun and the effects of space weather on the Earth are high.

The solar cycle typically lasts 11 years. But there is a much bigger exposure to space weather effects than in the past because of society’s heavy reliance on wireless communications technology and satellites.