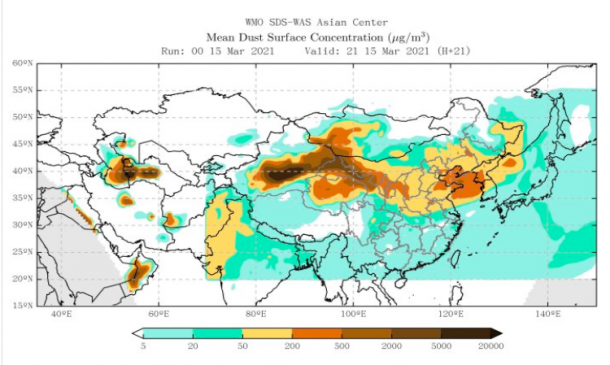 One of the worst sand and dust storms in a decade has hit Mongolia, northern China and other parts of Asia, with big environmental and economic impacts and harming air quality for millions of people.

The skies above the Chinese capital Beijing and other populous cities were choked with thick dust, triggering concerns about widespread health impacts, including respiratory problems because of high levels of particulate matter (PM). A number of casualties were reported in Mongolia.

Minimum visibility in many places decreased to less than 500 meters.

WMO's Sand and Dust Warning and Advisory System’s Regional Centre for Asia, operated by the China Meteorological Administration (CMA) in Beijing, accurately predicted the storm, which started on 14 March.

CMA statistics show that the storm was the strongest in China in the past 10 years.

In many places, levels of the coarse particulate matter, PM10, were hazardous. In Inner Mongolia, Gansu, Ningxia, northern Hebei and Beijing, PM10 peak concentration exceeds 5000 micrograms per cubic meter (μg/m3). The peak PM10 concentration in Beijing rose to over 9000 μg/m3, according to CMA.

Small particulate pollution has health impacts even at very low concentrations. World Health Organization guideline limits aim at the lowest concentrations of PM possible, with a 24-hour mean of 50 μg/m3.

It is expected that the sand and dust storm will gradually weaken, but will still occur in Northwest, North China, Huanghuai and Jianghuai areas through to 16 March.

The main sources of these mineral dusts are the arid regions of Northern Africa, the Arabian Peninsula, Central Asia and China.

Over the last decade, scientists have come to realize the impacts on climate, human health, the environment and many socio-economic sectors.

The WMO community is therefore working to improve forecasts and warnings to guide preparedness, adaptation and mitigation policies.