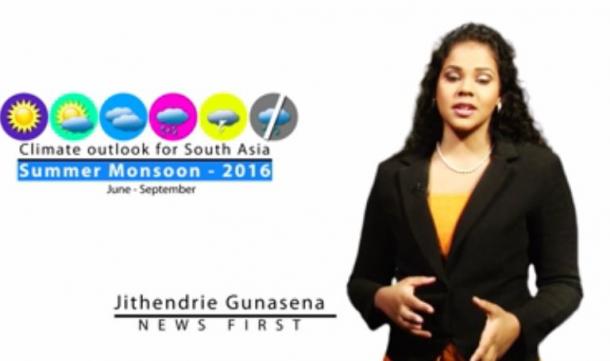 To further explain the consensus outlook, WMO invited Colombo-based News 1st to produce a TV weather report about the outlook. WMO also collaborated with Climate Central to produce high-resolution graphics and other information about the monsoon outlook, which are posted here.

From June through September, the Southwest Monsoon dominates life in much of South Asia. Accounting for 75-90 per cent of the rainfall in most parts of the region (excepting Sri Lanka and southeastern India), the monsoon determines the success of farmers and thus of national economies.

Advance information about the likely performance of the monsoon makes it possible for decision-makers to plan agricultural, public health and other risk-management strategies.  The 2015 monsoon outlook proved to be accurate; nevertheless, although a great deal of progress has been made in understanding monsoons, it should be noted that prediction, particularly of rainfall amounts, remains a challenge.

WMO has established Regional Climate Outlook Forums around the world to promote collaboration and information sharing on seasonal climate prediction and related issues. SASCOF was launched in 2010 to engage South Asian countries that share a strong interest in understanding and forecasting the monsoon. With support from Canada, this year’s SASCOF meeting in Colombo, Sri Lanka, developed the 2016 outlook through an expert assessment of prevailing global climate conditions, including the El Niño Southern Oscillation and the Indian Ocean Dipole (oscillations of sea-surface temperatures), Northern Hemisphere snow cover, and other factors, as well as forecasts from various climate models. Participants at the SASCOF meeting came from Bangladesh, Bhutan, India, Maldives, Myanmar, Nepal, Pakistan, and Sri Lanka and other countries and leading national and international climate centers.

According to the Intergovernmental Panel on Climate Change, seasonal mean rainfall in South Asia has been marked by a declining trend, with more frequent deficit monsoons. An increase in extreme rainfall events has occurred at the expense of weaker rainfall events over the central Indian region and in many other areas. In South Asia overall, the frequency of heavy precipitation events is increasing, while light rain events are decreasing.

Links to weather and health

The SASCOF meeting is being immediately followed by Climate Services Forums for the water and health sectors on 27-28 April. These forums are designed to support the Global Framework on Climate Services by promoting dialogue among weather and climate scientists and key users of climate information and predictions. The health forum will focus on improving the management of extreme heat events in South Asia. The water forum will bring together the climate and water communities to explore how SASCOF forecasts can support flood management, irrigation planning, water storage and so forth. For more information about the Climate Service Forums in Colombo, see the WMO news story here.