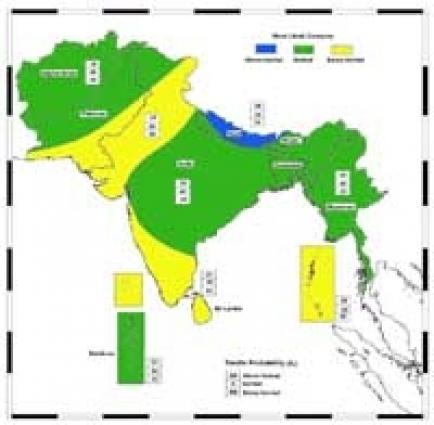 Large-scale summer monsoon rainfall for South Asia and the season (June–September) as a whole will most likely be within the normal range, according to the South Asian Climate Outlook Forum. There is a likelihood of below normal rainfall in some northwestern and southern areas of the sub-region.

However, the outlook statement notes that there is a large degree of uncertainty at this time because of the transition from La Niña to neutral El Niño/Southern Oscillation (ENSO) conditions and some possibility for the emergence of El Niño during the later part of the monsoon season. La Niña events are typically associated with a more active monsoon in South Asia, and El Niño events with a weaker monsoon.

A number of factors influence the performance of the South Asian summer monsoon. In addition to sea-surface temperature conditions over the equatorial Pacific and the Indian Oceans, these include winter and spring snow cover and land-surface temperatures over Northern Hemisphere, which are known to have implications for the strength of the monsoon circulation.

The South Asian Climate Outlook Forum, in its third session in Pune, India, consisted of experts from South Asian countries, supported by international experts. The meeting was co-sponsored by the Ministry of Earth Sciences, Government of India, India Meteorological Department, the Indian Institute of Tropical Meteorology, the Japan Meteorological Agency and the World Meteorological Organization (WMO).

WMO is actively promoting regional climate outlook forums around the world as part of efforts to improve seasonal climate predictions, facilitate consensus-based outlooks and make them more accessible and useful for forward planning and decision-making by different socio-economic sectors.

For more detailed information on the summer monsoon outlook and further updates on national scale, it is important to consult the concerned National Meteorological Service.