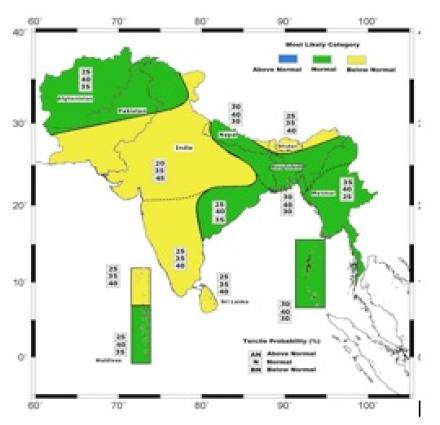 The South Asian Climate Outlook Forum has issued its climate outlook for the summer monsoon season of 2014. There is strong consensus among the experts about the possibility of evolution of an El Niño event during the summer monsoon season. However, it is recognized that there is uncertainty in the intensity of the El Niño event. There is also consensus about the potential for adverse impacts of El Niño on the monsoon rainfall over the region. However, other regional and global factors also can affect the monsoon rainfall patterns over the region.

The Forum deliberated on various observed and emerging climatic features that are known to influence the performance of the monsoon, such as the El Niño Southern Oscillation (ENSO) conditions over the equatorial Pacific, Indian Ocean Dipole (IOD) conditions over the Indian Ocean, winter and spring northern hemisphere (NH) snow cover and land surface temperature anomalies.

Eight South Asian countries participated in the Forum from 22-23 April to generate the consensus outlook. The Forum was preceded by a training workshop attended by participants from Afghanistan, Bangladesh, Bhutan, Maldives, Myanmar, Nepal, India and Sri Lanka.The meetings were hosted in Pune, India, by the India Meteorological Department (IMD) in collaboration with the Indian Institute of Tropical Meteorology (IITM), Pune and supported by Ministry of Earth Sciences (MoES), Government of India. The World Meteorological Organization (WMO) co-sponsored the events under a project funded by the Department of the Environment, Government of Canada, for the implementation of the Global Framework for Climate Services (GFCS).