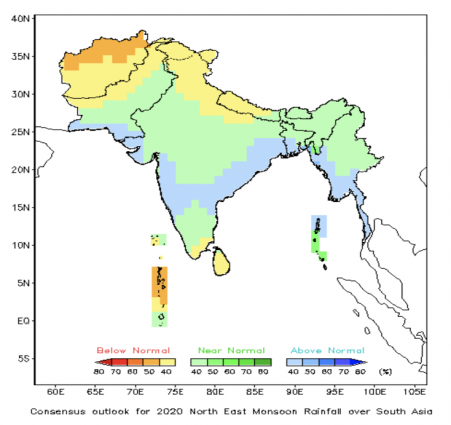 Below-normal rainfall is likely during the 2020 October – December (OND) season over the southern parts of South Asia including some parts of extreme southeastern India and most parts of Sri Lanka and Maldives, which climatologically receive good amount of rainfall during the season, according to the South Asian Climate Outlook Forum.

Below normal rainfall is also likely during the season over the northwestern and northern parts of South Asia including some areas along the foot hills of Himalayas. These areas, however, climatologically receive very low rainfall during OND season.

During the season, normal to slightly above normal temperatures are likely over most parts of the region.

This consensus climate outlook for the 2020 OND season over South Asia has been developed through an expert assessment of the prevailing global climate conditions influencing the South Asian climate and seasonal forecasts from different climate models around the world.

Currently weak La Niña conditions are prevailing in the tropical Pacific Ocean and neutral Indian Ocean Dipole (IOD) conditions are prevailing over the Indian Ocean. These parameters, which are known to influence the climate variability over South Asia are likely to continue at their current level during the OND season. Careful consideration is also given to other regional and global factors as well as the intra seasonal variability of the region that can affect the rainfall and temperature patterns over the region.

For more information and further updates on the seasonal climate outlook on national scale, the respective National Meteorological and Hydrological Services (NMHSs) may be consulted.