South Asian summer monsoon rainfall expected to be below normal 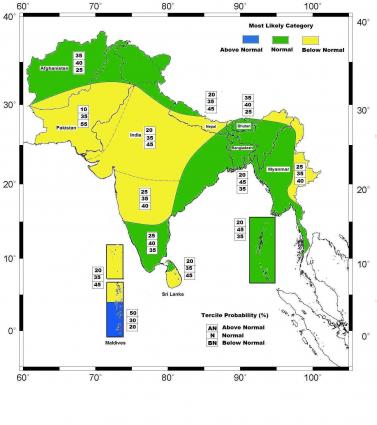 South Asian summer monsoon rainfall expected to be below normal

The South Asian Climate Outlook Forum (SASCOF) has issued its seasonal outlook, predicting below-average rainfall over large tracts of South Asia during the forthcoming summer monsoon. The Forum was attended by climate experts as well as drought managers and flood forecasters to help contingency planning in the water sector.

The Southwest monsoon accounts for 70-80 percent of annual rainfall in most countries of South Asia. It is a key driver of socio-economic development and well-being in the world’s most densely-populated region which is regularly hit by devastating flooding and damaging droughts.

Below-normal rainfall is likely over broad areas of western (Pakistan), central (India) and southwestern parts (Sri Lanka) of South Asia and some areas in the northeast (parts of Bangladesh and Myanmar), according to the Outlook (see map). Only the southern islands of the Maldives can expect to see above normal rainfall, with remaining areas expected to receive normal rainfall.

This is largely because of the weak El Niño conditions established over the Pacific Ocean. These are expected to continue during the southwest monsoon season from June to September, impacting on the monsoon performance.

The South Asian Climate Outlook is intended to inform decisions in key sectors such as agriculture and water management, disaster risk reduction and health. It was developed and issued at a regional forum hosted by the Bangladesh Meteorological Department and co-sponsored by the World Meteorological Organization. The meeting 20-22 April 2015 was attended by representatives from Afghanistan, Bangladesh, Bhutan, India, Maldives, Myanmar, Nepal, Pakistan and Sri Lanka, as well as regional and international organizations.

The climate outlook is a consensus product based on many different models and expert assessments, taking into account climate drivers such as ENSO (El Niño/Southern Oscillation), the Indian Ocean Dipole and Northern Hemisphere winter snow cover.

The outlook is made for the entire season. It does not make predictions of the onset of the monsoon or for rainfall for individual months. National Meteorological and Hydrological Services are responsible for downscaling the regional forecast to local scales and also provide regular updates as the season progresses.

Following the regional climate outlook, India’s Earth System Science Organization, Ministry of Earth Sciences and the India Meteorological Department issued the long-range forecast for monsoon rainfall in India on 22 April. It said that quantitatively, the monsoon seasonal rainfall is likely to be 93% of the Long Period Average (LPA) of 89 cm, with a model error of ± 5%. The LPA of the season rainfall over the country as a whole for the period 1951-2000 is 89 cm. (India Meteorological Department long range forecast for monsoon rainfall )

Other countries will also downscale the regional forecast to try to ensure maximum benefit to local users like farmers. The Maldives holds its first National Climate Outlook Forum at the end of April.

A Climate Services User Forum for the Water Sector, grouping hydrologists, water managers and flood forecasters, was held conjointly with the South Asian Climate Outlook Forum to assess the implications for the water sector.

South Asia has the largest concentration of water-related risks because of both floods and droughts, according to a recent report from the Global Water Partnership.

India and Pakistan regularly suffer devastating floods with a heavy human and economic toll. Recent landslides in Afghanistan, Nepal and Sri Lanka have claimed heavy casualties. Bangladesh receives runoff from a catchment area 12 times the size of the country. It has suffered from seven major floods in the past 70 years, each one flooding about two thirds of national territory and costing 3-5% of GDP.

The water sector forum was the second to be held with funding from Environment Canada and was co-sponsored by the International Commission for Irrigation and Drainage. It provided a joint platform for water managers and flood forecasters to discuss their needs for climate products such as more refined seasonal forecasts, and tailored hydrological models and data.

The forum was also designed to boost regional collaboration on flood forecasting, which is vital given the high number of trans-boundary rivers.

WMO is working with the International Centre for Integrated Mountain Development (ICIMOD) towards a regional flood forecasting system, as part of the HKH-HYCOS Phase II multinational effort with financial support provided by the Government of Finland.

Water stress is expected to increase as a result of population growth, urbanization, environmental degradation and climate change.

There are currently no validated early warning systems of drought in the region nor adequate tools to monitor its extent. However, in the coming years, this is expected to change with the establishment of a South Asia Drought Monitoring System, which was the focus of discussion – and considerable progress – with a strong engagement by the participating countries.