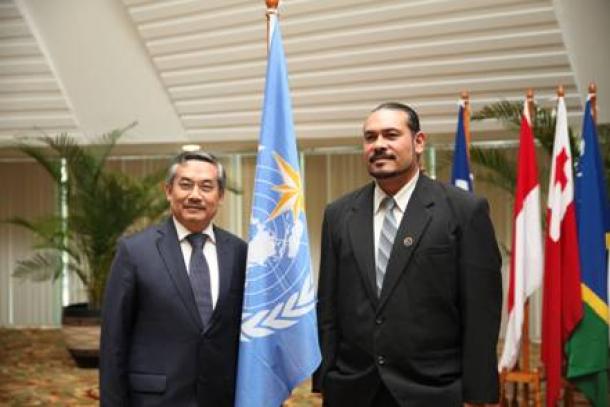 Meteorologists in the South-West Pacific are meeting to discuss how to strengthen weather and climate services in a region exposed to heatwaves, drought, tropical cyclones and flash floods, and is especially vulnerable to rising sea-levels caused by climate change.

Promotion of sustainable development, especially in Small Island Developing States (SIDS) is high on the agenda of the World Meteorological Organization’s Regional Association for the South West Pacific session in Jakarta, Indonesia, from 2 to 8 May, 2014.

WMO Secretary-General Michel Jarraud told the opening session that many parts of the region had been hard hit by extreme weather in the past few months., most recently, flash floods and tropical cyclone Ian in the Solomon Islands and Tonga respectively.

“The tropical cyclone activity was well above average in the Western North Pacific. We are all aware of the devastating impacts of typhoons Haiyan (Yolanda) and Usagi (Odette) on the Philippines,” said Mr Jarraud.

“The reports of WMO were the basis, and confirmed the results of, the Fifth Assessment Report of the IPCC. Sea level rise is severely impacting SIDS and highly populated low-lying coastal regions. Many species — terrestrial, freshwater and marine — are reacting to ongoing climate changes modifying their geographical ranges and behaviour. The impact on crop yields, in general, has been negative, with potential consequences for food security,” he said.

Mr Jarraud said WMO that to address the challenges of weather and climate extremes, WMO would continue to work to strengthen the human resources and institutional capacity of National Meteorological and Hydrological Services and Disaster Management Organizations.

Following the damages caused by Typhoon Haiyan, a fact-finding and needs assessment mission was carried out by WMO in the Philippines in April 2014, which identified user requirements for strengthened meteorological and hydrological services.

WMO is paying special attention to the challenges of Small Island Developing States. The Third International Conference on SIDS in Samoa in September 2014 will focus on building partnerships for sustainable development. WMO is engaged in leveraging partnerships with bilateral and multilateral donors to strengthen the capacity of meteorological services in several Pacific Islands and to accelerate the implementation of the Global Framework for Climate Services.