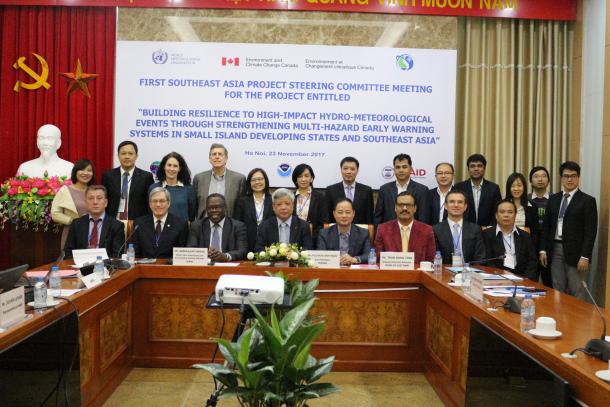 With new funds provided by the Government of Canada, WMO and its partners are stepping up efforts to support disaster risk reduction in Small Island Developing States (SIDS) and Southeast Asia.

Running until March 2021, the project will strengthen weather-, climate- and water-related impact-based decision support services and so help protect lives and property. The beneficiary countries in Southeast Asia are Cambodia, Lao People’s Democratic Republic, the Philippines, Thailand, and Viet Nam.

Much of this will be achieved through sponsoring WMO flagship activities such as the Severe Weather Forecasting Demonstration Project and the Flash Flood Guidance System in support of wider WMO strategic objectives on disaster risk reduction and service delivery.

Specifically, the project aims to:

The first meeting of the Project Steering Committee for the Southeast Asia component took place at the National Hydro-Meteorological Service (NHMS) of Viet Nam in Ha Noi on 23 November 2017. It was preceded by meetings on Southeast Asia sub-projects of the Severe Weather Forecasting Demonstration Project and the Flash Flood Guidance System to ensure that these activities are streamlined. It was proposed that Viet Nam’s NHMS should be the Southeast Asia Flash Flood Guidance System’s regional centre, and this will be considered by the Government of Viet Nam.

Nguyen Linh Ngoc, Vice Minister, Ministry of Natural Resources and Environment (MONRE) of Viet Nam, said the project would contribute to enhancing regional and national facilities and capacities for strengthening multi-hazard early warning systems in Southeast Asia to facilitate the production of impact-based forecasts and risk-informed warnings of extreme weather and other high-impact hydro-meteorological events.

“WMO hopes that these projects will empower participating National Meteorological and Hydrological Services to maintain effective multi-hazard early warning systems with greater accuracy, more advance notice and in a manner that is more responsive to the needs of users, including disaster management and civil protection agencies, the media and the general public,” said Abdoulaye Harou, Chief of WMO’s Data Processing and Forecasting Division.

The major outcomes were agreements on: i) the governance structure and implementation plans of the Project, ii) reviewing the demonstration phase of the Severe Weather Forecasting Demonstration Project in Southeast Asia which started in January 2016, considering the sub-project’s transition to operations in the near future, iv) developing the Southeast Asia Flash Flood Guidance System, and v) maintaining strong linkages between and undertaking parallel implementation of the two sub-projects.

The project also sponsored the 9th Session of the Association of Southeast Asian Nations (ASEAN) Climate Outlook Forum, which took place from 15 to 17 November in Ha Noi. It resulted in a consensus climate outlook for the period December 2017 to February 2018 (DJF).

“There is chance of a weak La Niña forming in late 2017 of at least 60%, around double the normal likelihood for La Niña. If it forms, the event is not expected to last beyond March 2018. While varying in local impacts, La Niña events are generally associated with wetter-than-average rainfall conditions over the ASEAN region, especially in the southern and eastern halves of the region,” according to the outlook.

Taking into consideration the present status of the climate conditions affecting Southeast Asia, the forecasts available from the Global Producing Centres (GPCs) and other global centres, and the national-level assessment from the NMHSs, the Forum agreed on the following consensus-based outlook for the DJF 2017- 2018 season for Southeast Asia.

TEMPERATURE Above normal temperatures are favoured over much of the Southeast Asia region for the upcoming boreal winter monsoon season (DJF 2017-2018), with the highest probabilities over the eastern Maritime Continent, northern Mainland Southeast Asia, and Sumatra. Below normal temperatures are favoured over the northern Philippines and southern Viet Nam.