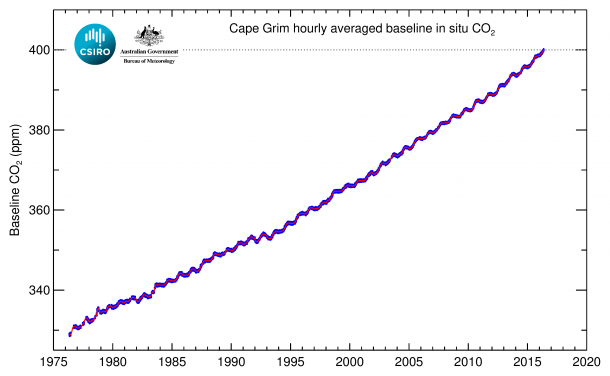 Human activity has increased the direct warming effect of carbon dioxide (CO₂) in the atmosphere by 50 percent above pre-industrial levels during the past 25 years, according to NOAA's 10th Annual Greenhouse Gas Index .

In 2015, the global average CO₂ concentration reached 399 parts per million, increasing by a record amount of almost 3 ppm.  From the end of the Ice Age to the beginning of the industrial era, atmospheric carbon dioxide remained remarkably stable at 278 ppm.

"We're dialling up Earth's thermostat in a way that will lock more heat into the ocean and atmosphere for thousands of years," said Jim Butler, director of NOAA’s Global Monitoring Division.

NOAA’s report followed news from Australia that CO₂ concentrations in the southern hemisphere have joined the north in breaching the symbolic 400 parts per million mark – and are unlikely to dip back below this level for many decades to come.

Measurements at Cape Grim on Tasmania’s northwest coast reached the milestone on 10 May and at Casey Station in Antarctica on 14 May, according to CSIRO and the Bureau of Meteorology of Australia.

Measurements at Cape Grim on Tasmania’s northwest coast reached the milestone on 10 May and at Casey Station in Antarctica on 14 May, according to CSIRO and the Bureau of Meteorology of Australia.

The stations form part of WMO’s Global Atmosphere Watch network, which spans 100 countries, including stations high in the Alps, Andes and Himalayas, as well as the Arctic and Antarctic.

The threshold was reached earlier than anticipated, as a result of a recent, strong increase in the growth rate of atmospheric CO₂. This was probably driven by increased emissions from fossil fuels, as well the impact of the recent strong El Niño, which reduced the capacity of natural systems such as oceans and plants to absorb CO₂, according to Paul Krummel, Research Group Leader CSIRO, and Paul Fraser, Honorary Fellow, CSIRO, writing in the Conversation.

“The impact of El Niño on CO₂ concentrations is a natural and relatively short-lived phenomenon,” said WMO Secretary-General Petteri Taalas. “But the main long-term driver is greenhouse gas emissions from human activities. We have the power and responsibility to cut these.”

“This should serve as yet another wake-up call to governments about the need to take urgent action to make the cuts in CO₂ emissions necessary to keep global temperature rises to well below 2°C,” he said.

The news coincided with the opening of the UN Climate Change conference in Bonn. This is focussing on how to implement the Paris Climate Change Agreement.