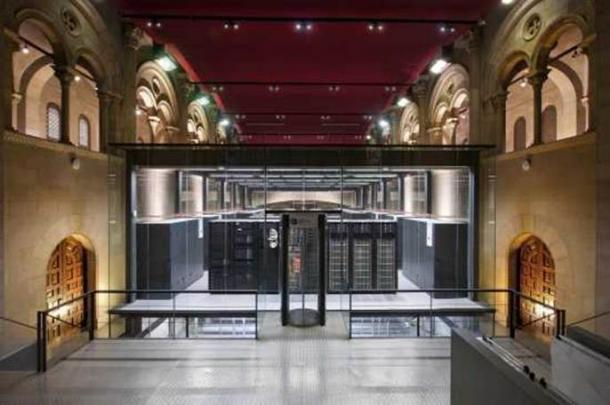 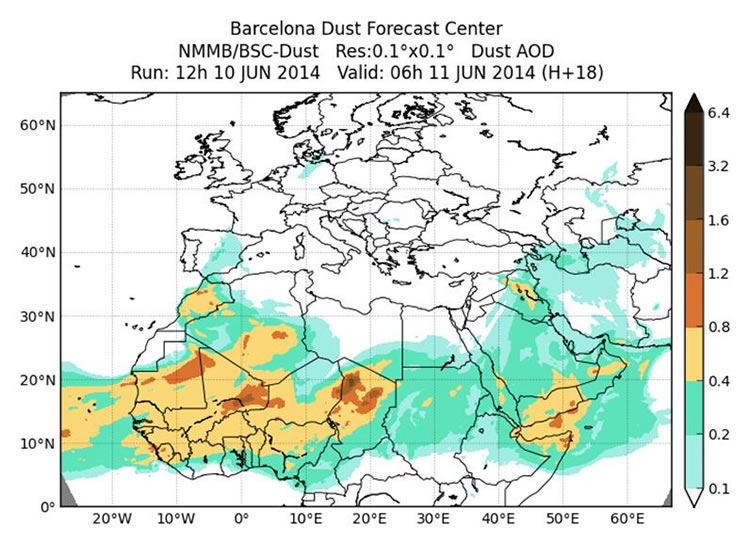 A new international centre has been established to improve predictions and provide operational forecasts of sand and dust storms which have a major impact on the economy, the environment and people’s health and which are expected to worsen as a result of climate change and land degradation.

The Barcelona Dust Forecast Centre was inaugurated on 10 June by the State Meteorological Agency (AEMET), Ministry of Agriculture, Food and Environment (MAGRAMA) and the Barcelona Supercomputing Center-Centro Nacional de Supercomputación(BSC-CNS). Its forecasts cover Northern Africa, the Middle East and Europe and are freely available.

It is the first global centre, approved by the World Meteorological Organization, to provide operationally products and forecasts that WMO members can use to issue specific warnings. It builds on the success of an existing regional node of the sand and dust assessment and warning system operated by AEMET and BSC-CNS which focuses on modeling and observation of atmospheric dust research activities (http://sds-was.aemet.es)

"This initiative meets a clear need. In many regions and countries of the world, sand and dust storms constitute a significant hazard" said WMO Secretary-General Michel Jarraud in a video message to the inaugural event at AEMET headquarters

«The implications of atmospheric sand and dust for human health are serious. It is estimated that two billion people living in arid zones are directly affected by sand and dust. The population living far away from the source region is exposed as well to a lesser extent. Health impacts include respiratory and cardiovascular illnesses, eye infections and also meningitis and valley fever. Other impacts include negative effects on ground transport, aviation, agriculture and visibility,» said Mr Jarraud.

The presentation event was also attended by MSc. Ivan Cacic, President of WMO RA VI, who welcomed this new centre and thanked the proactive role of Spain within WMO community, highlighting the interregional role Spain plays in activities like this, affecting WMO RAs I, II and VI or its leadership in other initiatives for the Greater Mediterranean Region such as MedCOF or MEDARE.

The event counted with the technical presentations of eminent scientists of the field: Dr. Emilio Cuevas, AEMET, Prof. Alexander Baklanov, WMO, and Prof. Jose-Maria Baldasano, BSC-CNS. These presentations highlighted that dust is also a major component of atmospheric aerosol, which influences solar radiation levels and clouds, and hence in weather forecasting and climate. Although the process is not yet fully understood, dust could also impact the dynamics of hurricanes and tropical cyclones and their formation. Moreover, essential minerals such as iron and phosphorus transported within atmospheric dust particles play an important role in fostering the productivity of rain forests and the ocean.

Model calculations indicate that about 50 per cent of the total atmospheric dust mass originates from soils that are disturbed by cultivation, erosion, frequent shifts in vegetation due to drought and rains and especially deforestation.

North Africa and the Middle East and Europe are among the regions most impacted by sand and dust storms. For instance and extreme dust storm hit the Iranian capital Tehran on 2 June, bringing daily life to a standstill. The Haboob-like event was due to severe local storm systems with strong air downdrafts emitting huge amounts of soil dust to the atmosphere. The challenge to be able to forecast accurately this meso and micro-scale phenomena remains for the scientific community, although there has been a great evolution in dust forecast and observations during the last years.

The new Barcelona Dust Forecast Centre, as WMO Regional Specialised Meteorological Centre in Atmospheric Sand and Dust Forecasts, aims to provide high quality services to end users. It builds on the research and development success of the WMO Sand and Dust Storm Warning Advisory and Assessment System (SDS-WAS), which was established in 2007 to improve observation technologies, enhance research results and facilitate access to forecast products by users in, for example, the health, aeronautical or agricultural sectors.

Spain hosts the regional centre for Northern Africa, the Middle East and Europe through a consortium between AEMET and the Barcelona Supercomputing Center. The Barcelona Dust Forecast Centre, through the supercomputer MareNostrum BSC, produces transport and deposition models of dust and will distribute its predictions through WMO`s Global Telecommunication System. The goal is to generate predictions of atmospheric dust that will mitigate its effects on the lives and property of the population. This new operational center will operate in parallel to SDS WAS regional center dedicated to research work and development of new products.