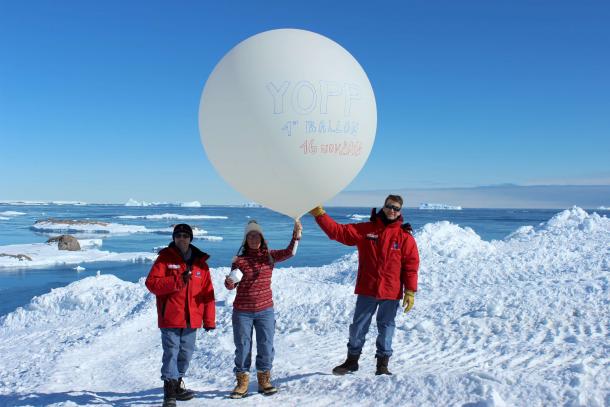 A concerted campaign to boost weather, ice and atmospheric observations in some of the most remote and inhospitable parts on Earth started this week, with the launch of a three-month Special Observing Period in the Antarctic.

With days getting longer, the summer is about to start on the Antarctic continent. November is the month when the austral field season begins. This summer, extra atmospheric and sea-ice measurements in addition to the routine observations will be carried out as a contribution to the Year of Polar Prediction (YOPP).

Weather services and international scientists will increase the number of atmospheric and sea-ice observations from different Antarctic land stations, during terrestrial field expeditions and aboard research vessels in the Southern Ocean.

The special observing period is part of the wider Year of Polar Prediction effort, which aims to improve environmental safety by improving forecasts in the Arctic and Antarctic in response to the rapid climate changes in polar regions and related transformation of human activities,.

The Year of Polar Prediction takes place from mid-2017 to mid-2019 in order to cover an entire year in both the Arctic and Antarctic and involves the World Meteorological Organization (WMO), Germany’s Alfred Wegener Institute (AWI) and a wide array of partners around the globe. In total, 21 countries are contributing to the YOPP with over a hundred research projects all contributing to the global effort. Earlier this year, two YOPP Special Observing Periods already took place in the Arctic.

Observations in the Antarctic region are particularly important as there are so few of them and they are shown to improve model performance over the mid-latitude regions where people live.

From 16 November to 15 February 2019, more than 2,000 extra radiosondes will be released from numerous meteorological stations.

In addition to atmospheric observations, YOPP-endorsed field campaigns and expeditions as well as autonomous instruments will feed their real-time or near-real time data into the Global Telecommunications System of WMO.

The additional data generated during the Special Observing Period in the Southern Hemisphere  will be used for numerical experimentation and internationally coordinated verification activities as well as for forecast evaluation and observational impact studies. Extra measurements help to identify ways to improve the prediction systems. Based on more accurate and reliable forecasts of weather and sea-ice conditions, recommendations for the future Southern Hemisphere Polar Observing Systems can be provided.