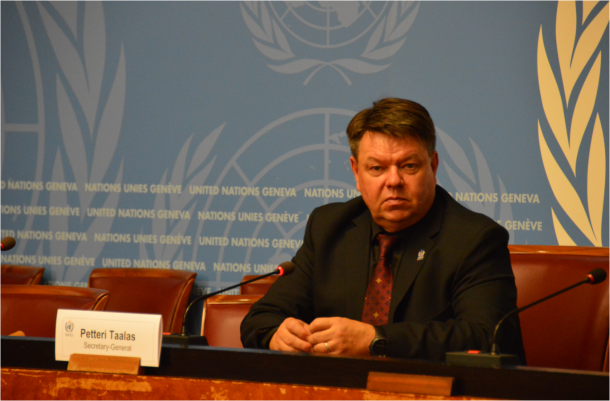 Media reports based on a recent interview that I gave in Finland have attracted attention, on the grounds that I purportedly questioned the international focus on the need for robust climate action. This is a selective interpretation of my words and my longstanding views.

I have been involved in climate mitigation since the 1980s.

In my interview, I made clear that a science-based approach underpins climate action, and that our best science shows that the climate is changing, driven in large part by human action.  However, I pointed out that the science-based approach is undermined when facts are taken out of context to justify extreme measures in the name of climate action.

Action should be based on a balanced view of the science available to us and not on a biased reading of reports by the Intergovernmental Panel on Climate Change, of which WMO is one of the parent organizations.

WMO is a specialized agency of the United Nations on weather, climate and water. Our mission is to collect, share and help apply the scientific evidence that is needed to act and adapt. We bring the facts to the table.

Working with our Members – the world’s 193 meteorological and hydrological services – we monitor the state of the climate, provide services in key areas such as early warning of weather and environmental hazards, and build global capacity to get the best data and analysis possible.

We have seen recording-breaking temperatures and greenhouse gas concentrations, the smallest amount of sea ice in the Arctic, melting mountain glaciers and rising sea levels.

It is highly important that we rein in greenhouse gas emissions, notably from energy production, industry and transport. This is critical if we are to mitigate climate change and meet the targets set out in the Paris Agreement on climate change.

To stop a global temperature increase of more than 2 degrees Celsius above pre-industrial levels, the level of ambition needs to be tripled. And to limit the increase to 1.5 degrees, it needs to be multiplied by five.

The challenges are immense. But in my interview, I underlined that we must not be driven to despair, given that reasonable, consensus-based solutions are available to the international community, governments and civil society.

Many such solutions were showcased this week in the report of the Global Commission on Adaptation, of which I am a member. And they will be in the international spotlight again on 23 September at the Climate Action Summit, convened by UN Secretary-General António Guterres in New York to boost ambition and accelerate efforts to implement the Paris Agreement.

WMO is coordinating a synthesis report of the latest climate science prepared under the auspices of the Science Advisory Group to the Climate Action Summit, which I co-chair. It will serve as a “transparent envelope” of authoritative and actionable cutting-edge science which underlines both the need for climate action as well as solutions to help in mitigation and adaptation.

To get to these solutions, we need a “Do” movement, not a “Talk” movement. This is our common goal.