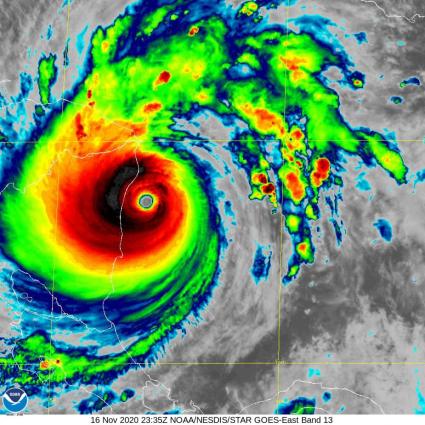 Back-to-back tropical cyclones have caused massive destruction and impacted millions of people in Central America and parts of Southeast Asia, underlining once again the threats posed by tropical cyclones to life and property and socio-economic well-being and the need for the global level coordination and cooperation under the umbrella of WMO.

Hurricane Iota made landfall in Nicaragua on 17 November as a powerful category 4 on the Saffir Simpson scale. It is the strongest Atlantic hurricane of the year and hit exactly the same area which is still reeling from category 4 Eta which hit less than two weeks ago and caused hundreds of casualties.

Iota is the record-breaking 30th named storm of the season. For the first time on record, the Atlantic has had two major hurricane formations in November at a time of year when the season is normally winding down. There have been four major hurricanes

(Category 3+) since October: Delta, Epsilon, Eta and Iota – all taken from the Greek alphabet because the regular list of storm names has been exhausted.

The United Nations Office for the Coordination of Humanitarian Affairs (UNOCHA) warned of potentially catastrophic consequences from such unprecedented hurricanes in rapid succession.  International appeals for assistance were already launched for Guatemala, Honduras, Nicaragua following Eta. 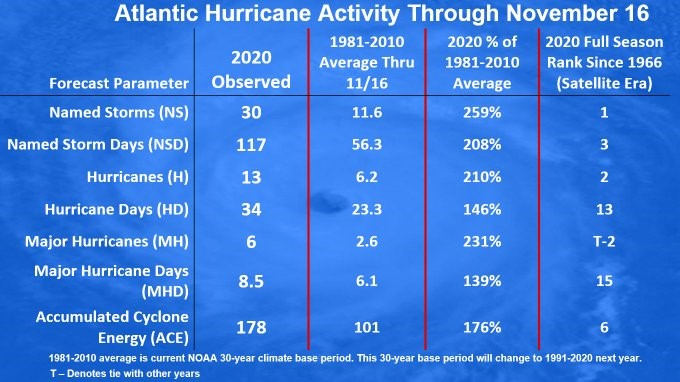 Iota made landfall in Nicaragua with maximum winds of 155 mph (250 km/h). It is a catastrophic hurricane, bringing life-threatening storm surge, winds, flash floods and landslides to Central America, as well as up to 30 inches (750 mm) of rainfall in isolated places according to the US National Hurricane Center, which acts as WMO’s Regional Specialized Meteorological Centre.

Flooding and landslides in Nicaragua and Honduras could be exacerbated by the ongoing impacts of Hurricane Eta because the two storms hit the same general location.

On the forecast track, Iota will move farther inland across northern Nicaragua ton 17 November and move across southern Honduras. Iota weakened upon landfall to category 2 and additional rapid weakening is expected as the storm dissipates over Central America by late 18 November.

Iota is expected to produce the following rainfall accumulations through Thursday:

This rainfall will lead to significant, life-threatening flash flooding and river flooding, along with mudslides in areas of higher terrain. 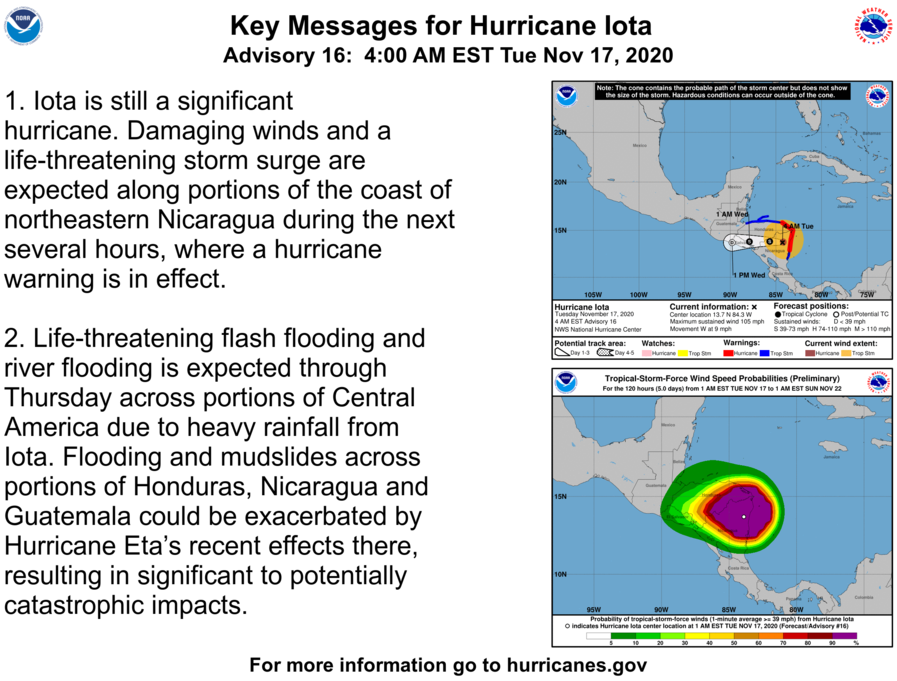 In the Western North Pacific Ocean and South China Sea, there have been 22 named storms so far this season, including 10 typhoons. This includes three at category 3 equivalent intensity, three at category 4 and 1 category 5 (Goni), according to RSMC Tokyo (the Tokyo Typhoon Centre).

Within a month, from 11 October to 15 November, eight tropical systems impacted Viet Nam which bore the brunt of torrential rainfall, flooding and landslides, causing huge loss and damages

Since early October, the series of tropical cyclones has affected In total, 32.5 million people, with more than 2.7 million people in Philippines, Viet Nam, and Cambodia in urgent need of assistance, according to OCHA. Houses have been damaged or destroyed by floods, storm surges, high velocity winds, landslides, and volcanic mudflows, forcing the evacuation of millions of people, according to OCHA. Health facilities, water and sanitation systems, and schools have been damaged. Crops, livestock, fishing boats, and other sources of livelihood have been swept away. 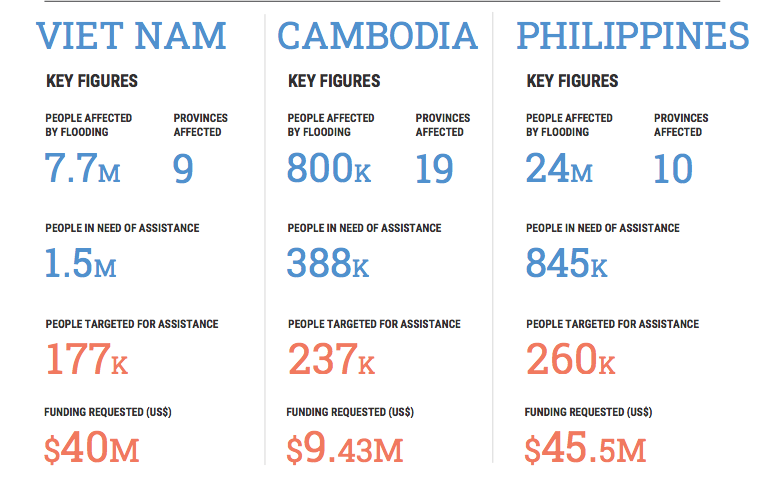