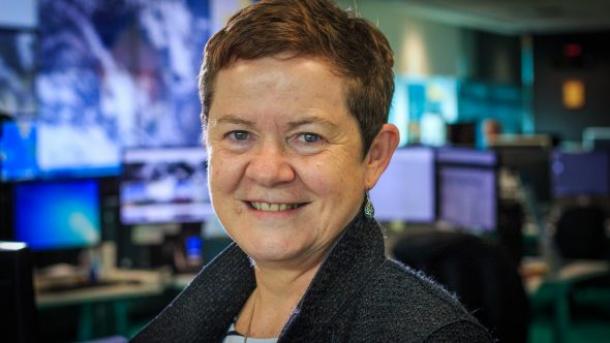 Dr Sue Barrell of Australia has been named as the laureate of the IMO prize - for her leadership of the international weather, water & climate community and for a career of commitment to the World Meteorological Organization.

WMO President Prof. Gerhard Adrian announced the decision at WMO’s Executive Council session.  The IMO prize (named after WMO’s predecessor the International Meteorological Organization) is the organization’s top award. Dr Barrell will collect the award and deliver a lecture at the World Meteorological Congress in May 2023.

Starting as a Graduate Meteorologist with Australia's Bureau of Meteorology, Dr Barrell had a distinguished career spanning operational forecasting, research, science, climate, infrastructure and data policy, retiring from her final role as Chief Scientist and Group Executive Science and Innovation in 2018.

“Throughout her career at the Bureau and since, Dr Barrell has played an immense role in WMO. Dr Barrell has led major initiatives within WMO and its constituent bodies, advancing international collaboration and delivering tangible outcomes across this global community, as well as serving as a visible role model for women in science,” according to the award citation.

Significant achievements have included: the development and implementation of the WMO Integrated Global Observing System (WIGOS); integrating polar and high mountain observations and strategic objectives into WMO's systems and services as Co-Chair of the WMO Executive Council Panel on Polar and High Mountain Observations, Research and Services (EC-PHORS); and most recently leading the development of the WMO Unified Data Policy.

“Dr Barrell's role in this milestone Policy for WMO has left a legacy which will deliver benefits to the broader weather, water and climate community for decades to come,” said the citation.

Dr Barrell’s influential contributions to advancing the goals and strategy of WMO commenced in 2004, when she became active in the Commission for Basic Systems (CBS. She was elected Vice President of CBS from 2008 to 2016, becoming the first woman to serve at that level in any technical commission.

She  took a lead role in the development of the WMO Integrated Global Observing System (WIGOS), paving the way for WMO's Earth systems-based reframing of WMO's Strategic Plan and the shaping of the constituent body reform process.

Dr Barrell’s distinguished international service is mirrored by her service to Australia with the Bureau of Meteorology. Since retiring from the Bureau, Dr Barrell has continued her love and commitment to science and holds board and advisory roles across science, technology, and education sectors, is a Fellow of the Australian Academy of Technology and Engineering (ATSE) and was awarded one of Australia's highest honours for public service, named as an Officer of the Order of Australia in 2022.

“Dr Barrell is a passionate and visible role model for gender equality and for women in science. She was named a Science and Technology Australia Superstar of STEM in 2017/18 and in WMO has strongly advocated for the introduction of gender focal point roles within SERCOM and INFCOM. Her successful national and international career in science demonstrates what gender equality can achieve and Dr Barrell remains committed to mentoring successors to continue her legacy in data and related challenges in WMO,” said the citation.