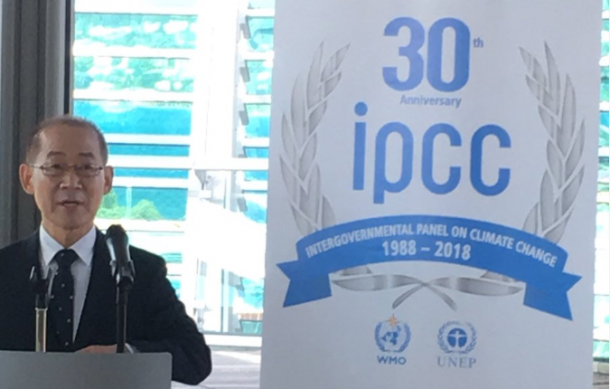 An event during WMO’s Executive Council to celebrate the 30th anniversary of the Intergovernmental Panel on Climate Change (IPCC) heard calls to accelerate implementation of the Paris Agreement and to leverage climate change solutions to address other threats and priorities for the sustainable development goals.

The Swiss government hosted a ceremony at WMO headquarters as part of year-long activities around the world to draw attention to the importance of the IPCC’s work on climate change. WMO and the United Nations Environment Programme jointly set up the IPCC in 1988.

“We have moved on from proving human intervention in the climate system to demonstrating the necessity of climate policy being the main driver of economic policy for the 21st century,” IPCC Chair Hoesung Lee told the gathering. “Business as usual may be very far from usual in a high carbon world,” he said.

The IPCC later this year will issue a special report on the impacts of global warming of 1.5 ºC above pre-industrial levels and related global greenhouse gas emission pathways.

Despite the scientific progress over the past 30 years, there are still gaps in understanding, said Mr Lee.

“We need to improve our understanding of bio-geophysical processes at various spatial and temporal scales, including biological productivity, changes in water availability, and the adaptive capacity of natural and human systems,” he said. “We also need to close knowledge gaps around thresholds for the tipping points that would lead to irreversible changes in climate and socioeconomic systems.”

He said there was also a need to incorporate climate feedbacks into socioeconomic system projections and so provide information on the relative weight of threats from climate change and threats to other national priorities.

”Climate policies that also address threats to other national priorities are more likely to be implemented and to be cost-effective,” said Mr Lee.

WMO Secretary-General Petteri Taalas hailed the IPCC as “the best success story or science communication that we have ever known. “

“The message of the science community has been heard by policy makers and more recently by the private sector,” said Mr Taalas. “The facts are very clear and we have started seeing the impacts of climate change in the growing number of disasters. Besides mitigation we have to pay attention to adaptation,” he said.

“The tasks of the panel remain as challenging as when the panel was established,” he said.