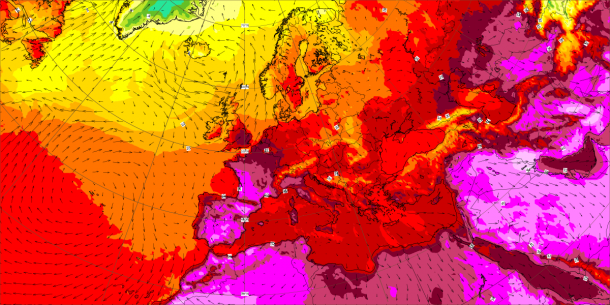 An unusually early and intense heatwave spread up from North Africa through Europe ahead of the Summer Solstice, bringing temperatures more typical of those witnessed in July or August. In some parts of Spain and France, temperatures are more than 10°C higher than the average for this time of year, breaking many monthly records. This is combined with drought in many parts of Europe.

As of 15 June, nearly one third of the American population was under some form of heat advisory, with some areas reporting triple digit (Fahrenheit) temperatures. These continued along the Gulf Coast and in the Northern and Central Plains. The ongoing episodes follow a prolonged heatwave in India and Pakistan in March and April.

As a result of climate change, heatwaves are starting earlier and are becoming more frequent and more severe because of record concentrations of heat-trapping greenhouse gases. What we are witnessing today is a foretaste of the future.

The Intergovernmental Panel on Climate Change projects that for 1.5°C of global warming, there will be increasing heat waves, longer warm seasons and shorter cold seasons. At 2°C of global warming, heat extremes would more often reach critical tolerance thresholds for agriculture and health, the report shows

We have to adapt. And one of the ways to do this is through heat-health early warning systems and action plans – the result of collaboration between the WMO community and public health authorities.

Extreme heat is deadly, especially for the vulnerable. High minimum overnight temperatures – when the body needs to recover – can be especially stressful. City dwellers are particularly susceptible because of the so-called urban heat island effect which magnifies heat impacts compared to the countryside where there is more vegetation.

A study by MeteoSwiss posted on its website on 15 June estimated that the difference between the temperature in a town and in rural areas could be up to 6 degrees C. The difference is especially marked at night. One of the reasons is that materials used in buildings and infrastructure absorb more heat.

The WMO co-sponsored Global Heat Health Information Network and the International Federation of Red Cross and Red Crescent Societies (IFRC) marked 14 June as Heat Action Day to raise awareness of how to #BeatTheHeat.

The campaign addresses issues including how to recognize and prevent heat-related health risks at home, at work, during sports and leisure. It gives advice on how to stay cool and hydrated and ensure the safety of family, friends and neighbours.

The heat was fuelled by an Atlantic low-pressure system between the Azores islands and Madeira, favouring the uprising of warm air in western Europe.

The Spanish national meteorological and hydrological service AEMET said that temperatures in the interior of the country topped 40°C in parts of the country on consecutive days this week, reaching up to 43°C in Toledo province (Talavera de la Reina) in central Spain on 15 and 16 June. The heatwave is due to end by the end of the weekend, according to AEMET.

An influx of Saharan dust into Spain has compounded the health and environmental stress,

Spain, like Portugal, is suffering from drought. The Portuguese Institute for Sea and Atmosphere (IPMA) reported the warmest May since 1931 and the severe drought situation is affecting 97% of the territory.

France saw its warmest and driest May on record.

Meteo-France said that the heatwave was the earliest on record and one of the most intense. T"The remarkable precocity of this episode is an aggravating factor,” said Meteo-France. The national “thermal indicator" - the average of daily minimum and maximum temperatures of 30 representative observing stations - was 27.38°C on Saturday 18 June. This was the second highest behind 27.95°C recorded on 27 June 2019.

Some stations saw temperatures 10 to 14 °C above normal and recorded either their absolute warmest day on record or their warmest June day on record. St-Jean de Minervois, in SE France, reported a temperature of 40°C on 16 June – the highest temperature for mainland France so early in the year.

Beznau, in central Switzerland, saw a temperature of 36.9 °C on 19 June. This was a new national temperature record for the month of June, according to MétéoSuisse.

The German weather station of Cottbus set a new station record of 39.2°C, according to the German Weather Service DWD.  Other countries in Europe are also seeing well above average temperatures.

In addition to the high temperatures, the main impact of this peak of heat is to enhance the ongoing drought as no significant precipitation is forecasted in the next days (except some isolate thunderstorms. Large areas from southeastern Central Europe to the northwestern Black Sea are also suffering from drought.

In the US Across the Atlantic, much of the western USA is facing the second or third drought year in a row (depending on the region), with fears of growing water stress heading into the summer season. The two largest reservoirs in the U.S., Lake Mead and Lake Powell, in Arizona, are currently at the lowest levels since they were filled: both are at just below 30% of capacity, according to the U.S. Drought Monitor.

Portions of central Nevada into northwest Arizona face critical fire risk, according to the US National Weather Service.

"Every heatwave occurring in Europe today is made more likely and more intense by human-induced climate change," said a study published by scientists at World Weather Attribution on the Human contribution to record-breaking June 2019 heatwave in France.

"The observations show a very large increase in the temperature of these heatwaves. Currently such an event is estimated to occur with a return period of 30 years, but similarly frequent heatwaves would have likely been about 4 ºC cooler a century ago. In other words, a heatwave that intense is occurring at least 10 times more frequently today than a century ago," it said.

According to IPCC the frequency of certain types of weather and climate extremes is increasing due to climate change and several attribution studies have shown that it has made many single recent events more intense. Although exact connections remain open to scientific discussion, there is growing evidence that some aspects of physical atmospheric dynamics related to human-induced Arctic warming, can at times enhance conditions associated with persistent disturbances in the polar jet stream, giving prolonged northern hemisphere summer periods of wet, dry or hot weather.